Earlier this year, Airbnb became one of the numerous Silicon Valley companies to take advantage of the thawing relations between the United States and Cuba, as it began expanding its services to the country.

It turns out, though, that the company sees Cuba as more than simply a business opportunity. It really wants to help bring the Internet to Cuba, a country with historically low access rates.

To do this, Brian Chesky, founder and CEO of Airbnb, has been named a Presidential Ambassador for Global Entrepreneurship (PAGE) by the the White House, it was revealed on Monday.

Chesky is just one of nine new members of the PAGE program, which is chaired by U.S. Secretary of Commerce Penny Pritzker. Others members of the program include Rich Barton, the founder of Expedia, Zillow and Glassdoor; Tory Burch, the founder and CEO of Tory Burch;  Daphne Koller, President and co-founder of Coursera; and Elizabeth Holmes, founder and CEO of Theranos.

Each member of PAGE has their own Signature Initiative, and for Chesky that will be building on Airbnb’s recent expansion into Cuba.

In April, Airbnb revealed that it was now listing over 1,000 casas particulares, which are traditional private home-stays run by local micro-entrepreneurs, in Cuba. Roughly 40 percent of Airbnb's current listings in Cuba are available in Havana, with the other 60 percent in cities including Matanzas, Cienfuegos, and Santa Clara.

In an interview with  Bloomberg Television, Chesky expanded on how he came to become a member of the PAGE Program.

"We were reached out to on behalf of the president to be invited here to be part of this entrepreneurship program. And I'm incredibly, incredibly excited. I think the idea is that my story is I started as an unemployed designer just six or seven years ago, and now I'm a hopefully very successful entrepreneur," he said.

"And I think that as a role model my story is a story other people can have around the world. And so I think we're here as role models, and to help inspire other people."

He also revealed that, just 40 days after launching in Cuba, the number of listings has already doubled to 2,000. By allowing people to stay in the homes of actual Cuban people, said Chesky, will help bridge the gap between the two countries.

"And the thing I'm very, very I'm excited about is President Obama has a desire to bring these two communities together, Americans and Cubans. What better way to bring them together than actually in their homes? That's a really important thing to do."

Airbnb is one of a number of tech companies that are looking to make their way to this new market.

In early February Netflix announced that it has expanded to Cuba, offering it service for $7.99 to those in the country who have access to Internet connections and access to international payment methods.

Cuban citizens were given access to "a curated selection of popular movies and TV shows," including Netflix original series like House of Cards, Orange is the New Black and Marco Polo, as well as kids programming like All Hail King Julien, The Adventures of Puss in Boots and original documentaries including Virunga and The Square.

Then, in March, it was reported that Amazon had begun laying the groundwork for eventually being able to ship packaged to Cuba, though given the trade embargo that still exists between the two countries, it seems more that Amazon is getting ready for a future where the United States and Cuba eventually lift that ban. 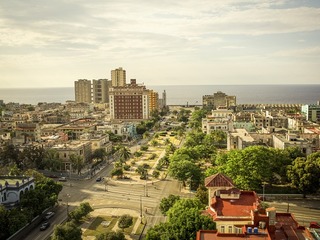