It's great validation for JustFab and the team, but it doesn't change how he runs his business 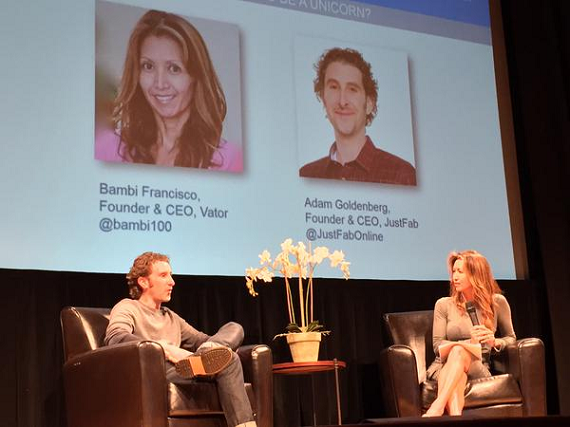 At Vator's annual Splash Oakland event, Adam Goldenberg, co-CEO of JustFab, sat down with Bambi Francisco, founder and CEO of Vator to talk about his company, its future and how he built JustFab to where it is now.

Three years after being founded, the subscription e-commerce company raised $85 million in August of 2014, in a round led by Passport Special Opportunity Fund, with participation from existing investors such as Matrix Partners and Shining Capital.

The round brought JustFab's total funding is $300 million, and turned it into a so-called "unicorn" or a company with a valuation of over $1 billion.

Francisco asked Goldenberg what it feels like to now be in that special club.

"We never think of ourselves as a unicorn, so it's not like we're in our office, saying, 'It's great to be a unicorn!'" he said. "But we have a lot of employees who have dedicated the last five years, and every moment of their lives, to building great brands and making our customers happy. So it's wonderful to have that external validation, that w're building a big, valuable company, but, really, it doesn’t change how we operate on a day to day basis. Ironically this round of financing had a much smaller impact on how we operate than some of our prior rounds."

Unicorns have become much more prevalent in the last couple of years. In 2014 alone, 38 different companies entered the $1 billion club. That is more than the three previous years, when only 22 companies made it combined. There have already been 16 more joining the club this year already.

"Do you think we're getting a little out hand here with valuations?" Francisco asked Goldenberg.

"That's a tough question, you need a ittle bit of a crystal bal, but my gut is that if you could invest in those 100 unicorns as an asset class, it would actually out perform broader market over the next 10 years. Valuations across the board, in the public stock market, as well as the private stock market, are high," he said. "Some unicorns may be overvalued but the big dinosaurs are going to die. On relative basis, you think about a unicorn being valued at $1 billion, or a public security being valued at 15 to 20 times earnings, I'd bet on the unicorn."

So who are those dinosaurs when it comes to JustFab's industry? The retailers like Forever 21, The Gap, Ambercrombie, and H&M.

"Apparel and accessories in North America is about $360 billion a year. And, today, about $50 billion happens online," he said. "10 years ago it was practically nothing. Three years ago it was $20 billion. If you look at the entire apparel and accessories industry, it's not growing. It was $360 billion last year, it will be $360 billion this year. But where customers are shopping is changing. So five years from now that $50 billion will be $100 or $110 billion. And most of the guys making their money in retail aren't ready for that kind of shift."

That all being said, JustFab opened its first test store a year and a half ago, and will be opening more stores in the future. And that is because Goldenberg believes that, in 20 years, half of all shopping will be online, leaving another $150 billion or so up for grabs in storefront retail.

"We still want to get part of that remaining $170 billion. We think we have a great brand and we want to focus on retail."