Lingua.ly provides users with newspaper article geared toward their specific interest and vocabulary 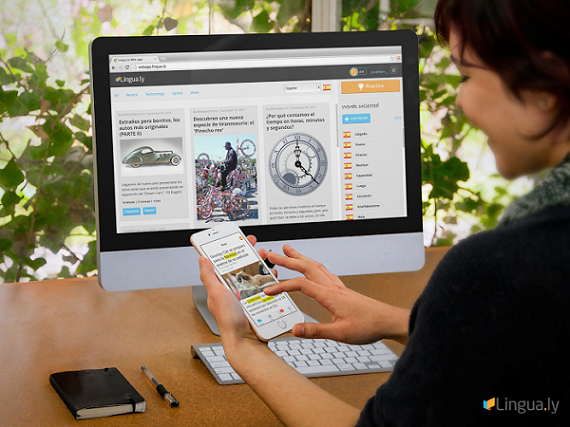 I've learned numerous languages over the course of my life: Spanish, Italian, Hebrew, and Ancient Greek. Yes, Ancient Greek. It was a requirement for a high school program I was in to learn that or Latin. I should have chosen Latin.

You know how many of those I can speak now? None. I think that is because none of those languages were ever put into any context. I never knew how to relate them to English. Just repeating words and phrases does nothing for me.

The idea of putting a new language into the right context, and aimed at the individual user, is the idea behind Lingua.ly, which has announced that it has raised a $1 million seed round from 1776 Ventures and Yochy Investments, along with angels Shai Rephaeli and Udi Netzer. The company had previously raised $800,000 from Venturegeek, Fulcrum Investments, Shaul Shelachand Netzer. This round brings its total funding to $1.8 million.

Founded in 2011, the Tel Aviv-based Lingua.ly which takes a new approach to digital language learning with a free cross-platform solution that combines an online dictionary with a smart personalized flashcard system to teach beginner through advanced learners via web immersion.

Here's how it works: when a person signs up, Lingua.ly doesn't ask them if they're are a beginner, intermediate or advanced in a language. Instead it gives them three starter words, and will then find articles in the language the person wants to learn that contain those phrases.

So, for example, if the word is "dog," the article could be about dog training or dog fighting rings, Meredith Cicerchia, director of communications and e-learning at Lingua.ly, explained to me.

"Everything we can find on the Web that contains that word, the user can then open article, double click on words and start collecting their vocabulary."

It also has a Google Chrome extension so that it users can  Lingua.ly on any website. Lingua.ly can tell how often a user clicks, where they pause, what they look up the most and then use that to map their vocabulary. The more articles the user opens, and the more words they look up, the more Lingua.ly can cater news to their interests, and help build their language skills.

Each word comes with a flashcard, along with audio pronunciation, a dictionary and a repetition game to help with memorization.

The idea is to give help users learn a language based on their specific needs; the words they already know and what they are interested in.

"If there are too many words you don't know it gets frustrating, and if its a subject that you're not interested in you will likely move on," Cicerchia said. "But if you know 90% of a sentence, you can take a guess and learn from that context. It gives you extra time to think about what words means if its picked it up in context, instead of being handed it to you with a definition."

This method is especially helpful for intermediate level students, meaning people with a basic grasp on the language, but who are also bored with services like Dualingo and Memrise. And there are, currently, no other services for people who need something to keep their language skills fresh.

"We think that users need to have a flexible learning ecosystem. Language is the medium in which we learn about so many things. Learning words without context is a flat way of going about it, so we wanted to see a tool where people could track lanuage learning across all aspects of their life," said Cicerchia.

So, if someone learned English in grammar school, and is now in their 60s, they might have faded over time. If they do on vacation, though, to a place where English is the dominant language, Lingua.ly can help that person add more English words to their vocabulary, and help them keep it active so they don't forget.

Lingua.ly currently supports over 18 dictionary languages, including English, French, Spanish, Italian, Portuguese, German, Dutch, Russian, Arabic, and Hebrew. It will use the new money to continue to build out its language database, in languages that include Swahili, Farsi and Hindi, and to expand globally.

It will also use the funding to grow its developer team. With 10 employees, Lingua.ly plans to add at least another two employees this year.

And, finally, it will expand to more platforms, with extensions on Firefox, as well as providing a service that students can use in school programs so that teachers can use Lingua.ly to track student progress.