Musement raises a €5 Million Series A round 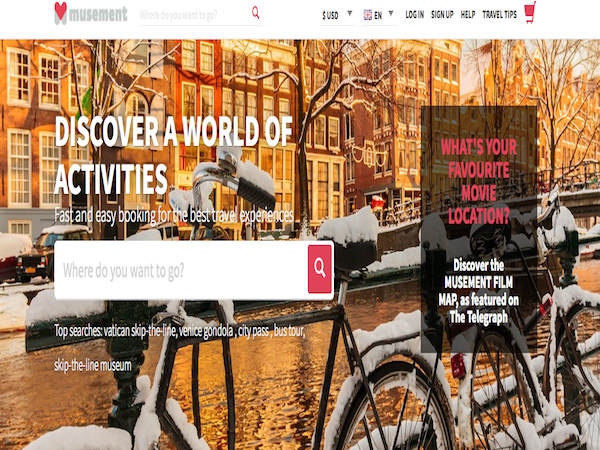 Musement, a London-based startup, announced on Wednesday that it has raised €5 million in Series A funding from P101, 360 Capital Partners and Italian Angels for Growth.

The in-trip-activity platform will used the Series A round to boost its team internationally, extend business development and research and development.

While the likes of TripAdvisor, Booking.com feature "things to do," and Expedia continues to expand its reach and to acquire the competition, activities aren't their bread and butter. Musement, though, is geared toward setting up the travel extra-curriculum.

What does it have in store for the travelers? It differentiates itself from the big players by focusing on targeted verticals such as; sightseeing, food and wine, tours, trekking and diving.

Musement aims to dominate the Southern European market initially, then expand to encompass Europe and the Americas.

To call the the travel and tourism industry in the United States a booming business doesn't do it justice. SelectUSA reports that it "generated nearly $1.5 trillion in economic output in 2012. This activity supported 7.8 million U.S. jobs, and accounted for 7 percent of all U.S. exports. One out of every 17 Americans works, either directly or indirectly, in a travel or tourism-related industry. In 2011 U.S. travel and tourism output represented 2.8 percent of gross domestic product."And Musement, who up to now, has been focused in Europe, wants a piece of the pie.

"We’re extremely pleased to back Musement, a highly promising online travel startup. With the new funding, the company will be able to accelerate its offering in new markets,” Giuseppe Donvito, Partner at P101, said in a statement.”

When viewed today, the platform is highlighting activities for all age groups in Madrid, Paris, London and other major European cities but New York is nicely featured too, and in the coming year, more American cities are to appear.

“We have a strong belief that tapping into highly specific activity verticals, coupled with a curated editorial approach, is a winning formula for the experiential traveler,” Alessandro Petazzi, Musement Co -Founder and CEO, said in a statement.

“The increasing number of consumers wanting to travel specifically for a certain activity is rising fast and travel is becoming an ever more emotional purchase decision.”

Of course, if Musement proves to be a success, there's nothing to stop the giants in the industry to incorporate its winning formula or go into an acquisition frenzy.

While clear signs of an over saturated space are showing, with a multitude of websites all showing generally the same information in the same manner, consolidating itself, but Musement may be positioned to spice things up a bit for the weary travelers.