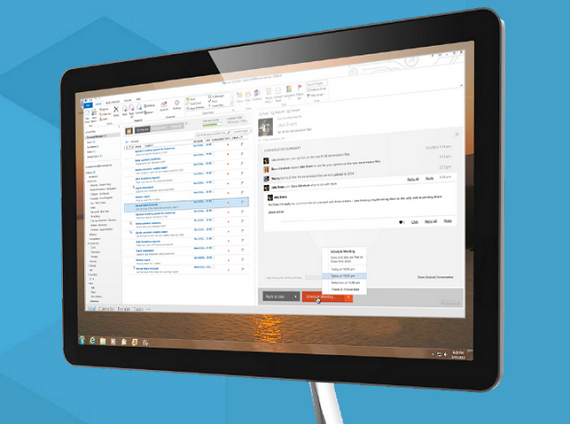 As anyone with a professional e-mail account knows (so, basically all of you, I'm assuming) you get a lot of junk mixed in with the important stuff. Every day I get up and the first thing I do is highlight all of the stuff I don't care about until I'm left with a list of important mail, whether it be something from my boss, or from a company that wants me to cover their new funding round.

Many companies are trying to solve this problem, but many are coming at it from the consumer side, but getting the right e-mails on time is even more important in the corporate world. So here comes Knowmail to try and bring their solution to the enterprise.

Knowmail is a personal assistant that helps employees communicate and collaborate more effectively from any location with any device. And now the company has just raised its first ever funding it was announced on Tuesday: a $1.2 million in seed funding led by early stage venture capital firms Plus Ventures, 2B Angels, AfterDox and INE Ventures.

"Our founders came from large U.S. corporations, and we found that the ability to communicate inside corporation was very difficult, even dramatically so when you become an executive, or manager of a team or group," Haim Senior, CEO of Knowmail, told me in an interview.

"Eventually, because there so many communication platforms, it became very difficult to communicate and create an impact. Most of the time employees wind up going back to e-mail, even though there are a lot of alternative platforms for communication."

Employees wind up spending 30% to 50% of their work on time on e-mail, but the innovation around the space has been lacking, he said, because it's either large companies trying to improve what they are already offering, or smaller ones trying to give platforms a better look and feel.

"It's great that they trying to do something, but our agenda is not just about platform," said Senior. "Most importantly, not just that it's the platform itself that needs to be fixed."

Instead, Knowmail tries to understand how people communicate, and what is most important to them, and serve up the most important mail based on prioritization, rather than just time stamp. It gets embedded into e-mail client, such as Outlook or Gmail, and will then now only recommend certain e-mails, but will also try to predict what the person will likely do next with each message.

For example, it will recommend that a piece of mail gets moved to a specific folder, and tagged so it can be found in the future, rather than the person having to drag and drop it itself.

While Knowmail is still a "work in progress," Senior did tell me that is already has an accuracy rate of above 90% for which messages are important, and what the customer is likely to do next.

"We have different mechanisms to predict it, as well as fail safe mechanism, so that if we don’t have any understanding around that message, or you changed your role in the company, or your manager is being repositioned, we put in place a failsafe, in case what the algorithm thinks won't be accurate," Senior told me.

"We are very close to our customers and users and we recognize that it is a trust issue. We are organizing info in a different way," he said, so Knowmail also gives users the ability to switch back into their old inbox to see different views and see if an e-mail was potentially missing that was important.

Of course, there are other services also trying to update the inbox, but there are three things that set Knowmail apart, according to Senior.

The first is the team.

"When customers see our approach and start to pilot and the way we deliver they understand. Most startups issues with budget, issues and resources but we give 100% plus to our customers," he said. "They can see we are taking it very seriously, and are always on time or ahead of time."

The second is the "human factor."

"We are taking the human factor into consideration and not just the platform. We are putting our investment into trying to find out what is the human factor without violating privacy or compromising on trust," he said.

And, finally, the fact that Knowmail is going toward the enterprise side of the business.

"Our ability to understand corporations, and not just the individual, is key. Most companies are concentrating on consumer side, which is not just different problem, but a wide problem. We are focused on corporate communication because they are more accountable and it is important from a respond time perspective."

The company will use the new funding to focus on research and development, and to go more broadly into the U.S. market. It will also use it to create additional algorithms, and to incorporate other functionalities beyond just prioritization.

Founded in early 2014, the Tel Aviv-based Knowmail currently has thousands of users, and an undisclosed number of corporate clients, which it helps save both time and money.

"Let's say save you 20 minutes a day, what guarantee is there that you're doing additional work during that time? We have tricks that we have already implemented that prove that we save, not just time, but also that we can show a company that we are increasing revenue."

Senior declined to elaborate on that last point, though, calling it the "secret sauce" for Knowmail.