Yahoo has, since its inception, had more twists and turns, and ups and downs, than a popular telenovela.

The Yahoo Mobile Developer Suite offers  an extensive array of mobile tools to further monetize, publish and track mobile advertising, such as: 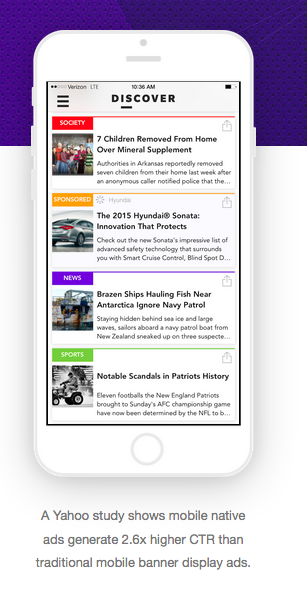 Flurry Analytics, which provides free insights from the industry's leading mobile app analytics tool; Yahoo App Publishing App,which offers functionality to monetize your app with native and video ads from Yahoo, Flurry, and BrightRoll advertisers; Yahoo Marketing App, which facilitates aiming and reaching a target audience with the Gemini native and video marketplace; a Yahoo Search App to keep users on Yahoo and monetize those; and finally  Flurry Pulse,which sends the app data to partners of your choice with one SDK.

This  launch of Yahoo Mobile Developer Suite is not surprising as, in the past year, Mayer has taken a winning gamble on mobile apps and it has paid off: in 2014, Yahoo hauled in $1.2 billion in mobile-related revenue, positioning it as No. 3 among companies in that category.

Yahoo employs more than 500 developers in its mobile efforts, which account for about ten times more than what it was a few years ago when Mayer wisely turned her focus to mobile products and services.The mobile economy is roughly $3.3 trillion a year and counts for a quarter of the company's total revenues.

Another highlight of Thursday's presentation are stats that revealed that mobile consumers spend 2.2 billion hours on apps developed by Flurry.

Thursday's announcement is not the only good news for Yahoo: a recent study released Wednesday by research firm comScore, offers  its latest analysis of the U.S. desktop search marketplace, placing Yahoo  a solid third with an 11 percent uprise from the previous month. Google continues to rank first, and Microsoft holds a steady second place.

Yahoo's search engine upswing is largely attributed to Mozilla's Firefox browser adopting Yahoo as its default search engine, after ten years of featuring Google. And, according to Mozilla, with Firefox users conduction over 100 million searches per year, the switch played in Yahoo's favor.

Yahoo's financial fate is closely tied to mobile, and its future depends on its ability to carve a place amid fierce competition for online advertising from Google, Microsoft, Facebook and others.  With 1 billion viewers, 575 million of whom are mobile users; Yahoo just may succeed.

Shares in Yahoo reached their highest values of the day during the presentation, at $44.17, traded up 1.1 percent from earlier at $44.13.

We have contacted Yahoo for comment. If we hear back, we will update the story as needed.