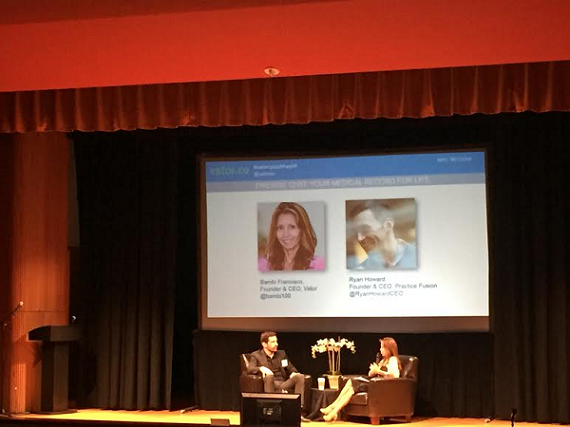 At Vator Splash Health on Thursday, Practice Fusion CEO Ryan Howard talked a lot about the amount of data his company has, even going so far as to say that the company has collected so much that it can actually predict a patient's quality of life.

But the big question is: who owns that data, what happens to it and who can Practice Fusion share/sell it to?

When Vator founder and CEO Bambi Francisco asked Howard about whether or not there would eventually be interoperability between the company and other EHRs, meaning whether they would share the data with each other, Ryan responded that, yes, that is what he thinks will eventually come to pass.

"Let's say you are Allscripts and you have 50 thousand prescriptions, there's no way to go to 50 thousand doctors offices and extract that data," he said, while also noting that it is the doctor who owns that data anyway.

That is why a cloud-based model, where data can be easily shared, is so important.

"Every piece of data that has been generated by a doctor on Practice Fusion is in Practice Fusion right now. If you ask me right now, I can quote in real time and get you the answer back,' he said, saying that, eventually, all of the major cloud based players will plug into one another, so that all of them with be communicating with each other and sharing data.

Francisco then asked him about the companies that could benefit from all the data that Practice Fusion has been collecting, and challenges of having an open API since Practice Fusion doesn't actually own the data in question. Does that mean the company can't open up the data to share with others?

"We actually do open it up. One of the challenges with an open API in healthcare is that, let's say you have a patient record and allergy initiatives and genetics labs. Just think about opening that up. Where does consent need to be? Is Bambi consenting to her record being shared? Is it identifiable or not? Is the doctor consenting as well? So challenge number one is explaining the third party services and why you opened it up," said Howard.

"The second issue is that the value of the data is different to different parties. And what I mean by that is we send superbills to billing companies, and they might pay us a nickel to process that because we drive efficiency to their business because they only have one check instead of thousands. That same record might be 10 or 15 or 100 dollars to a company doing research. So the economics are case by case and, when I look at the market, it's really difficult to categorize all the different healthcare startups and go, 'What's the data worth?'"

Practice Fusion does open the data to share it, and soon will have the ability to let anyone connect and interject data and add to in their own dialogue.

"So whether you're a quantified app, whether you're a clinical tool, whether you're a transcript company, you'll be able to pull a record and then have a dialogue with our system and, basically, interview the doctor and populate the chart as well. And then we will start chopping off different pieces of the chart to be available as well," said Howard.

"The reality is that to expose an API would probably cost an enterprise like ours a quarter of a million dollars."

Francisco then asked about big pharma in particular, and what kind of data they are looking for, specifically.

It can also tell users what drug the patient was on before, if they've gotten better or worse. For example, with an anti-obesity drug, to track and trial that drug over a year "would be a tremendous cost."

Instead, they can use Practice Fusion data, track the drugs and the weight of patients, and compare its effectiveness against another drug.

"That allows pharms to get more specific about who this drug should be used on."