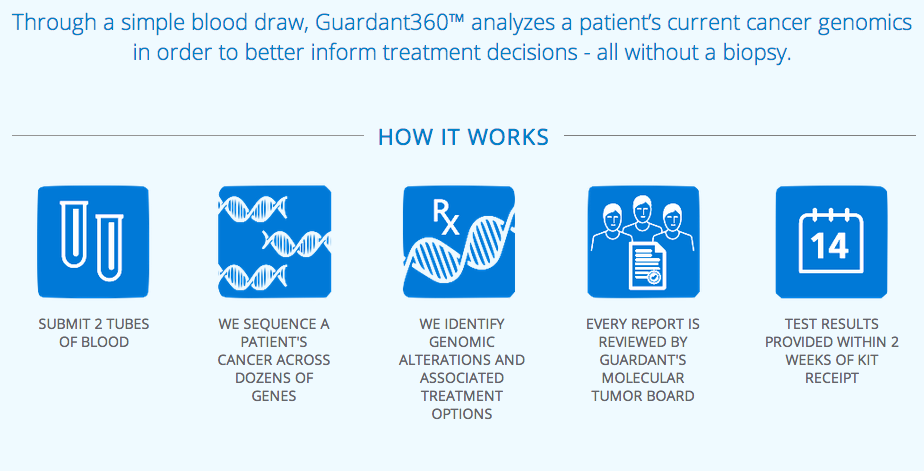 In the last three years, two of my relatives died of cancer. While I was not very close to either situation, I was part of the string of emails, explaining to family members the status of the cancer. In both cases, I remember strongly the occasional disagreements about the various treatments suggested.

About 7.3 million people die each year from cancer, according to a membership organization to fight cancer. In the US, it's up to 600,000 annually, making it the second leading cause of death, behind heart disease. While death rates are declining, according to a 2012 report, the numbers are still staggering, and one reason is because patients just aren't getting the right treatments.

Genomic diagnostic tests are changing that and venture capitalists are taking notice.

Guardant Health, a three-year-old venture-backed startup trying to improve the efficacy of monitoring cancer and how it mutates in cancer patients, just brought its total amount of venture financing to $100 million, after landing $50 million in Series C funding, led by Lightspeed Venture Partners, with participatiog from Formation 8, and existing investors, such as Khosla Ventures and Sequoia Capital.

[Note: Vator is holding its first-ever Splash Health startup and investor event and competition on Feb. 12 at Kaiser Center in Oakland. Join us! Register here: vatorsplashhealth.com]

Guardant Health, which was founded in 2012, has developed a cancer-tracking test called Guardant360, which allows oncologists to obtain more detailed information about how cancer is progressing in a patient with just a blood draw vs a biopsy, which can be more costly and invasive.

"This is not a test for diagnosing cancer," said Dr. Helmy Eltoukhy, Guardant Health CEO. "It's a test for existing cancer patients to get real-time information about their cancer... Turns out, cancer is like HIV, and it keeps changing."

A biopsy is a test of a person's tissue to detect diseases, and sometimes, it involves surgery. Depending on the kind of biopsy done, the cost can be upwards of $15,000, with additional tests, bringing the total to $20,000, said Dr. Eltoukhy.

Importantly, biopsies, according to Dr. Eltoukhy, are less efficient than they used to be, due to new technologies. "Turns out, biopsies miss genetic mutations," said Dr. Eltoukhy. For instance, imagine a tumor being like a flower patch, he explained. All the flowers are orange, but there is a mutation that is green and it's critical to test. Since a biopsy is only taking a sample of tissue, it may only be picking up samples from the orange flower. Blood tests, on the other hand, get contribution of DNA from everywhere in the tumor and from multiples sites. By doing so, it can pick up on critical mutations.

This information about mutations at the genomic level can allow oncologists to make more accurate assessments on the treatments needed. "In cancer, 75% of treatments are ineffective," said Dr. Eltoukhy. "Part of that is the matching problem. Not matching the patients with the right treatments."

Using blood tests, such as Guardant360, allows oncologists to see what's happening at the genomic level with the cancer and then match them with a better treatment, he said.

Essentially, by using the blood-test procedure, it's less invasive, more effective, and more affordable. The test is $5400. The process is also faster. The blood test is received in a day and oncologists can get results in two weeks.

In theory, the more accurate the reading, the more accurate the treatment. But a cancer patient would expect to take another blood sample and test if the cancer progresses or stops responding to the treatment, which can be as often as six months or as long as every couple of years, according to Dr. Eltoukhy. That said, there is a lot of savings if you consider that using Guardant's genomic-diagnostic test is $5,000 vs a biopsy, which could be upwards of $20,000.

Guardant360 was released nationwide to doctors last year. The new $50 million infusion means the release has been successful.

"I started looking at Guardant in the fourth quarter of 2014 [the first time I heard of them]," said Chris Schaepe, a partner at Lightspeed Venture Partners. Guardant was "making exceptionally fast progress with the adoption of this approach by physicians and that led us to engage in the due diligence and speak with the physicians."

Dr. Eltoukhy wouldn't disclose how many cancer patients have tried this process or how many hospitals have been signed up. "We haven't released any numbers on patients or oncologists, but we have oncologists using this in every major center. They're hundreds." The results have been positive, particularly in clinical outcomes for breast cancer patients, he said.

While there are no conclusive studies that show that this process leads to treatments that improve the outcomes for cancer patients, oncologists are apparently embracing it.

"We felt like this company had a narrow focus and was generating successful repeat business from oncologists more so than other companies that we had seen in terms of the liquid biopsy [taking blood samples," said Schaepe.

Using blood samples to determine the evolution of cancer in the body isn't new. There is a growing number of advocates for the use of CTCs or circulating tumor cells. But in fact, the first observation of CTCs were in 1869, according to Dr. Eltoukhy.

Eltoukhy doesn't dismiss this process, but says looking at CTCs has its drawbacks. Firstly, it's useful for late-stage cancer patients only. And the sample set of information to analyze is smaller than what he looks at.

Guardant looks at "waste DNA shed by the tumor cell" or what he refers to as "cell-free DNA", which are substances outside of cells wherease CTCs are inside the cells. In other words, Guardant is looking at a "much richer vital area," he said.

Cell-free DNA are small fragments of DNA shed by dying cells for multiple reasons, including natural causes, and treatments, such as chemotherapry. CTC’s are live whole cells that somehow break off of tumor tissue and start circulating in blood. "Recent papers in the NEJM have shown there is about 100X more tumor-dervied DNA in the cell-free (extracellular) domain versus the cellular (CTC) domain," said Dr. Eltoukhy.

But looking at this waste DNA isn't new either. The medical field has known that there is tumor derived cell-free DNA floating in blood for about 20-30 years. Maurice Stroun, one of our advisors, is credited with pioneering the tumor-derived cell-free DNA field in the 90’s, said Dr. Eltoukhy. It just so happens that sequencing technology hasn't been cheap and sensitive enough, he said.

That's where Guardant Health has its competitive advantage. Prior to Guardant Health, Eltoukhy worked as a senior director at Illumina, which makes gene-sequencing technology. "What we did was develop digital sequencing, which improves sequencing by 100 to 1000-fold," he explained. In layman's terms, basically, the enhanced sequencing is analogous to the enhanced pixels in a camera, or even smartphone. Fifteen years ago, stand-along handheld cameras worth $150 could have the quality of 2 megapixels. Today, an iPhone has more than 8 megapixels alone.

So imagine having short fragments of DNA coming from tumor cells and floating in the blood. "Over 99% of those fragments aren’t from tumor DNA. So you have to see one part out of 1-thousand to be able to see tumor-driven fragments." In the past, someone may only see one part in 10. The digital sequencing improves the resolution.

Still, there are others working on similar technologies.

"There is always a lot of academic research in many important areas – this is a field that there has been tons of hope and promise around in the research setting," he said. "The distinction here is it’s a big endeavor (as you know) to actually translate promising early studies to a robust commercial product that needs to work on every patient, day in and day out.  Besides the technology breakthroughs that make this test more powerful than what has been reported in research papers, the salient breakthrough here is that this is the first commercially available product of its kind and that it is being used in clinics across the nation and positively impacting patient’s lives. Indeed, this is not technology of the future but every cancer patient can have access to this test today."

A big and emerging market

Guardant Health is in a rapidly growing field, which Schaepe describes as "genomic diagnostic testing." He points out that in 2013, Foundation Medicine became one of the first companies in this space to go public. After going public at $18, Foundation Medicine is now trading at $46.

"I would say over the next three to four years, one could expect to see a series of interesting genomic-spaced diagnostic companies go public," said Schaepe. Indeed, Cowen & Co. sizes the market for liquid biopsy at $10 billion by 2020. Guardant's addressable market is more likely to be $2 billion, said Schaepe.

But that's plenty big enough, even with a number of competitors emerging.