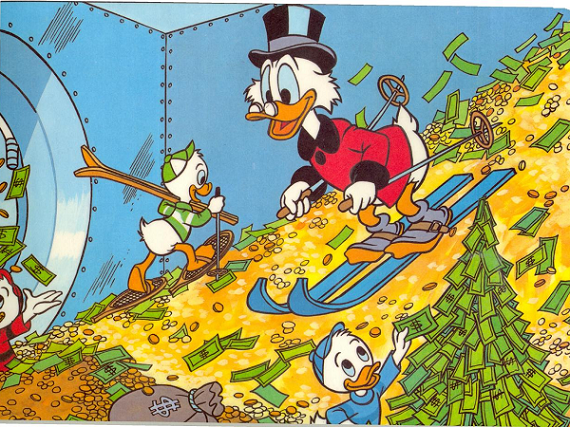 Venture capital is back, baby!

After a down year in 2013, in which the amount of capital raised by U.S. venture capital firms dipped, it came roaring back in 2014. In fact, the firms raised so much capital that they had their best year since 2007. That's how good it was.

Venture capital firms raised a total of $29.8 billion, from 254 funds, during 2014, according to the Fundraising Report put out by Thomson Reuters and the National Venture CapitalAssociation (NVCA). That is a 69% increase by dollar commitments from  the $17.7 billion raised in 2013.

The last time VC  raised more was back in 2007, right before the great recession hit,  when it raised $30 billion. When it came to the number of funds, 2014 was the busiest year for U.S. venture capital fundraising since 2001, when 324 funds were raised.

On a quarterly basis, the VCs raised $5.6 billion from 75 fundsduring the fourth quarter of 2014. That translates to increase of 14% compared to the number of funds raised during the third quarter, but also a nine% decrease by dollar commitments.

The report also took a look at follow-on funds.

For the full year, there were 96 new VC funds, which raised $3 billion. That is an increase of 76% in dollars, and a 50% increase in number of funds.

Finally, the largest VC fundraising came from  Canaan Partners, which raised $675 million for its tenth fund, entitled Canaan X. That was followed by Formation 8, which closed its second fund with a total of $500 million.

The largest venture capitalfund raised during the entire year of 2014 was from Andreessen Horowitz, which raised $1.7 billion for its Fund IV.

What's behind the increase in venture capital?

Neal Hansch, Managing Director of the MEST Incubator, attributes the rise to the number of new firms that have sprung up, something that is backed up in the data collected by NVCA.

"I think these fundraising figures are a reflection of the relatively healthy IPO and exit markets this year and in particular, a result of LPs redeploying capital returned to participate in follow-on funds and make new commitments to smaller first time funds from experienced VCs who have broken away from their existing firms to launch new platforms," he told me.

"While the general impression is that the venture industry has continued to consolidate over the last few years, with the highest profile firms raising the bulk of new dollars committed to the asset class, it’s most interesting and exciting to see this level of LP activity being pointed at new firms and funds."

Jed Katz of Javelin Venture Partners attributes it to the success of the startups that are being funded. They are doing so well, he believes that they are justifying putting the increased amount of capital into the firms.

"Innovation is thriving and amazing start-ups are being created. And many of the breakout companies that are getting the giant valuations, and consequently driving substantial returns, actually deserve them.  I understand why investors are trying to participate in those and are are committing more capital to venture funds," said Katz.

"We are about half way through, and I would expect money flowing to venture to continue increase until the end.  We came out of such a terrible trough in the ‘00s that the ten year returns of venture looked really poor in 2010 (the first ten year period without the bubble years!). Many LPs in funds follow ten-year returns. Returns in the last few years have been getting much better, and the ten-year has turned up," he said.

Another factor he pointed to was the increase in tech IPOs in the past two years.

"Put this together, and Q1 of 2014 was the best VC fund-raising in a long time.  it Seemed like almost every fund was out topping off," he said, "Also, many active angels have joined the dark side an raised funds.  When we started Bullpen in 2010, we counted fewer than 20 seed funds.  At last count in 2014, there were 221. That's up 10 times in four years."