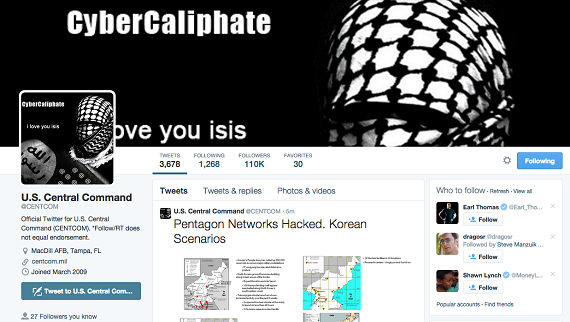 I've said it before and I will say it again: if all of  the hackings, data breaches and nude photo scandals of 2014 couldn't get people to care, then I really have no idea what ever could.

Well, how about one of the most dangerous organizations on the planet potentially gaining access to classified government documents? Would that do it?

Google and YouTube accounts belonging to the U.S. Central Command were hacked on Monday, it has been confirmed to VatorNews by the US Central Command. Both accounts have since been suspended as a result of the breach.

“We can confirm that the U.S. Central Command Twitter and YouTube accounts were compromised earlier today,” a CENTCOM spokesperson told VatorNews. “We are taking appropriate measures to address the matter. I have no further information to provide at this time.”

According to the Wall Street Journal, the attackers claimed to be either affiliated with, or at least sympathetic to the Islamic State, or ISIS, a.k.a. the group that has been all over the news for the last few months after it was able to take control of several regions inside both Iraq and Syria.

The most important part of this story are reports that the hackers were able to get their hands on classified documents as a result of the attack. Some of the Tweets put out by the group included phone number for top military commanders, as well as what the hackers said were military scenarios for potential conflicts with North Korea and China.

The group, which calls itself "CyberCaliphate" also posted a message to PasteBin on Monday, with links to documents on other websites

The message reads, in part:

"In the name of Allah, the Most Gracious, the Most Merciful, the CyberCaliphate under the auspices of ISIS continues its CyberJihad. While the US and its satellites kill our brothers in Syria, Iraq and Afghanistan we broke into your networks and personal devices and know everything about you.

You'll see no mercy infidels. ISIS is already here, we are in your PCs, in each military base. With Allah's permission we are in CENTCOM now.

We won't stop! We know everything about you, your wives and children.

Currently, the government is downplaying the potential ramifications of the attack, with one unnamed senior Pentagon official telling the Journal that the information posted by the hackers on the Twitter account did not appear to be highly classified documents.

“It does not appear to be anything problematic,” the official said.

A Twitter spokesperson would only say, "We do not comment on individual accounts, for privacy and security reasons. The Pentagon has requested our assistance with an account security issue, and we're working with them to resolve it."

The spokesperson also assured me that, "Verified government accounts have additional security requirements beyond unverified accounts."

YouTube was not available for comment at this time. We will update this story if we learn more.