Watchup raises $2.75M to bring the personalize the news

Watchup is an app that aggregates news video from sources including the WSJ, Fox and CNET 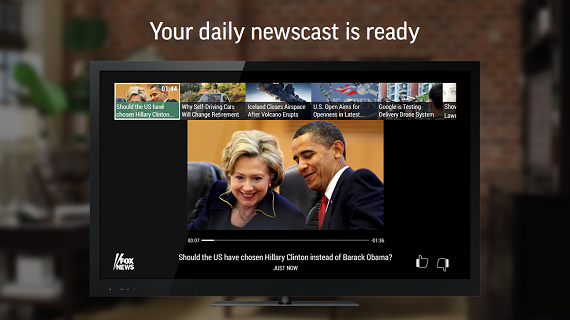 With so much content streaming online, and channels like HBO and CBS already announcing that they will start offering stand-alone online streaming services, the way we view television is changing very rapidly. It's not hard to envision a time when the television, as we currently know it, no longer exists. And that time could be soon.

Certain categories, though, have not really been able to keep up with the transformation, one of those being the news. But perhaps not for long, if Watchup, a company looks to give the news a big digital makeover, has anything to say about it.

Watchup announced on Thursday that it has raised a $2.75 million round of funding. The round was led by Tribune Media, with participation from The McClatchy Company and existing investors Knight Enterprise Fund, Stanford-StartX Fund, Ned Lamont, Gordon Crovitz and Jim Friedlich.

The company had previously raised $1.5 million, including a $1 million round in February. This latest funding brings its total capital raised to $4.25 million.

The Menlo Park-based Watchup is an app that builds personalized newscasts for its users on mobile and tablet. It does not product videos itself, but aggregates them from a variety of new outlet partners, including YouTube, The Wall Street Journal, The Washington post, Fox News and CNET.

"There’s a lot of very high quality news content out there, but its hard to find and hard to discover. We're taking the good old fashioned newscast as a starting point and reinventing it,” Adriano, co-founder and CEO of Watchup, told me in an interview.

The more the person uses Watchup, the more personalized it becomes, learning from their behavior, understanding what they like and don’t like, and then giving them the news that is more relevant to them on a single platform.

The typical audiences for Watchup are millennials, cord cutters and media savvy people, those "who don’t understand why they should pay over $100 for a bunch of channels they are never going to watch," Farano told me. "They've seen the music industry, and the movie industry, moving and adapting to this new digital age. The news industry hasn’t don’t this yet, but we've paved the way."

Watchup is coming along at exactly the right time, as streaming of online television has increased by 388% in just the last year.

"We're in the middle of a revolution over the way people want to consume their content," said Farano. "They're not asking for the moon, just for a choice, for high quality, and a great experience."

Watchup currently has 12 partnerships, but with Tribune and McClatchy coming on, it will add another 50 in the first quarter of next year.

In addition to global news sources, Watchup is also currently talking to local news channels in order to stream their content as well, in order to give users a more complete news experience.

The company will use the new funding to hire some new people, as well as to improve its algorithm to help people discover better videos. It will also help Watchup expand beyond mobile and tablet to expand to OTT and gaming consoles. The company recently launched on Amazon Fire TV

"We want to own the living room. We think content can be even better on the bigger screen and we believe that it can be a great experience," said Farano.

Watchup's ultimate goal is to reinvent the TV news experience, making it more personalized, more meaningful, and easier to discover what is important to them.

"We feel that the movie industry, the entire entertainment industry, had that revolution. News is slower to move forward but we're going in right direction. There's a lot of momentum and video is driving big dollars," Farano said. "Even more interesting is the way people are watching, with OTT and gaming consoles seeing the strongest growth. This is a huge trend and publishers are acknowledging how important it is to their strategy."

Watchup reinvents news watching with an app that builds your personalized newscast on mobile and tablet. Partnering with The Wall Street Journal, CNET, Fox News and other top news brands, Watchup is featured both by Apple and Google Play and was accelerated at Stanford’s StartX and Turner’s MediaCamp. Investors include Microsoft, Stanford and Knight Foundation.