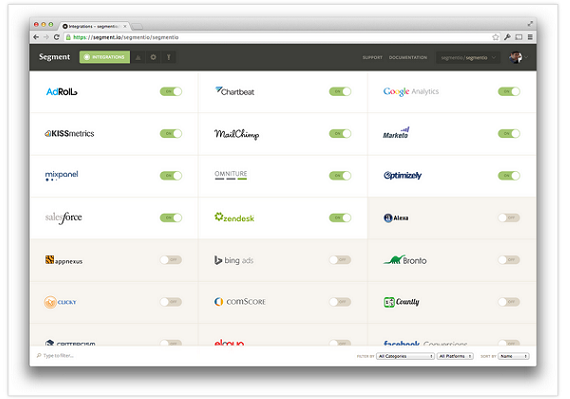 Customer data hub Segment has raised $15 million in Series A funding, it was announced on Wednesday. The round was led by Accel Partners with participation from existing investors Kleiner Perkins Caufield & Byers and e.ventures. Segment had previously raised $2.6 million, bringing its total funding to $17.6 million

Segment says that it plans to use the new funding expand its team in the coming year. It currently has 27 employees, and is looking to fill positions that include some new engineers, sales development, a hiring lead and an account executive. It plans to grow its team from 25 to 50 in the next year.

The company also plans to add new features to the platform, including better ways to plan and manage customer data, and easier ways to implement tracking.

Developers save months worth of time spent integrating and maintaining these vendors, instead getting access to a single platform that collects, translates and routes all customer data.

"Traditionally, teams have had to make difficult choices when it comes to managing their customer data. They might choose individual best-in-class tools, but then spend months evaluating and integrating them all. Or a team might integrate once with a single “monolithic” solution like Adobe SiteCatalyst or Salesforce, but then realize a jack of all trades is the master of none," the company wrote in an accompanying blog post.

"At Segment, we believe that businesses shouldn't have to choose. Our hub model has the low integration cost of monolithic suites, but connects you with an entire ecosystem of specialized, best-in-class tools to make your data incredibly powerful. Your data should go with you wherever you want, whenever you want."

"Engineering teams spend a huge amount of time pushing data around. We make that disappear completely," Peter Reinhardt, co-founder of Segment, told VatorNews. "After implementing Segment our customers can just flip switches to send their data wherever they need it. This saves an enormous amount of engineering time and effort, and helps marketing and BI teams move much much faster."

By using Segment, engineers can  reduce their analytics budgets by 80% "by discovering new tools and negotiating better rates."

Founded in 2012, Segment now has over 4,000 customers, which include sites such as Bonobos, Rdio, BaubleBar, RunKeeper and Fool.com

"With Segment, data lock-in – a pain-point companies have faced over the years with their analytics providers – has finally been solved. After a referral from one of our portfolio companies, we knew that we had to be involved with the Segment team," Tom Gieselmann of e.ventures told VatorNews.

"We quickly realized the disruptive nature of their offering and the time it saves for developers and product marketers in startups and large enterprises alike. No longer do developers have to integrate yet another analytics tool; they now just simply flip a switch to launch new services within their applications."

In addition to the new funding, it was also announced that Accel partner Vas Natarajan has joined the board of directors at Segment.

In the past year, Segment has doubling the number of apps on its platform to 117, and increased its data volume by ten.

"Our goal is to become the single repository for customer data. We believe that the analytics space is getting more and more fragmented, and that this is a good thing: it means amazing products built for specific niches, and they can be powered by all the data infrastructure we've built at Segment," said Reinhardt.