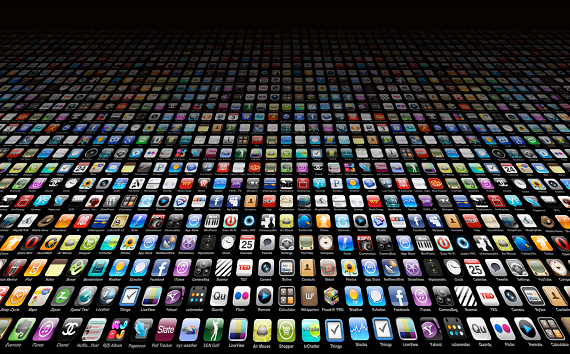 When I meet someone who doesn't have a smartphone (and there are increasingly fewer people that I can say that about) I can't help but wonder how they live without mobile apps. I mean, how did any of us ever?

App have become the de facto way for us to access the Internet now; they long ago overtook mobile Web browsing, and this year, for the first time, they became more popular than desktop Web browsing as well. There has even been talk of them, eventually, overtaking television consumption, making them the first medium to do that in TV's 65-ish years in existence.

So its no surprise that our app usage is continuing to grow. According to a new report out Localytics on Tuesday, the amount of time we spent in apps has increased by 21% over the last year, mostly fueled by music and health. The study looked more than 1.5 billion devices and 28,000 apps.

The increase seems to mostly come from the number of times we open apps. That has increased, from an average of 9.4 times a month a year ago, to 11.5 times a month now, an increase of 22%. At the same time, though, we seem to be spending the same amount of time inside them: an app session length has remained constant at 5.7 minutes.

The three main types of apps that are driving this growth are music, health and social networks.

Music saw tremendous growth over the past year, increasing the amount of time by 79%. That, according to the report, has led to an additional 64 minutes on these apps per month. No wonder every company under the sun wants to get into music streaming!

Health and fitness apps added 22 additional minutes per month, an increase of 51% year to year. As Localytics points out, the new iPhone 6 and iPhone 6+ will comes with a new Health app, while the Samsung Galaxy S5, which has an integrated heart rate monitor and a fitness tracker. Basically, our smartphones are increasingly becoming connected to our overall health and well-being and the app usage is reflecting that.

Music apps are typically used for commuting, which explains why they have the longest session length and a high number of launches per month, since people probably use them every day on the way to work.

Social networks, on the other hand, have far more app launches per month than any other category, over 25, compared to 16.7 for sports and 15.4 for news. But the time spent inside them is, by far, the lowest. Why? Because people want to be up to date about what’s going on... but there typically is not all that much that's new to see on social media if you are constantly checking it. So users seem be constantly going on, scrolling through what’s new, and then clicking off.

Credit to TechCrunch for first spotting this report.