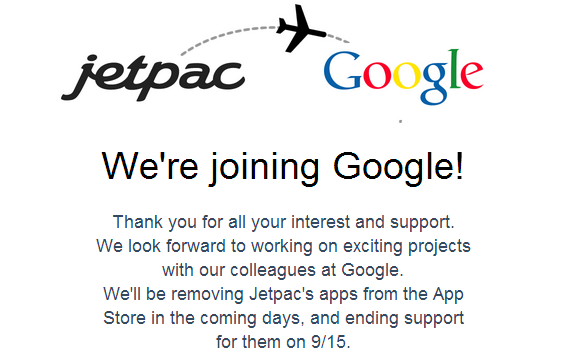 The appeal of photo-sharing has gone far beyond simply being able to see what your friends are up to. Now they have to be analyzed, categorized, and fed to the right person at the right time using machine learning.

Google has taken a step in that direction with its purchase of Jetpac, a company dedicated to analyzing and organizing digital pictures, it was revealed on Jetpac's homepage on Friday.

While no financial terms of the deal were disclosed, Jetpac will be shutting down, and I think we can all make the assumption that this is yet another acqui-hire for Google.

Jetpac's apps will be removed from the App Store "in the coming days," and support for them will be ending on September 15th.

"Thank you for all your interest and support. We look forward to working on exciting projects with our colleagues at Google," the company wrote.

The San Francisco-based Jetpac says it provides mobile travel recommendations by combining image processing, big data, mobile and social technology. What that essentially means is that it creates travel guides based on pictures of sites, people and food that are uploaded to Instagram.

Examples might be "top 10 food trucks in Austin," or "10 scenic sights in Portland." The app provided city guides for over 6,000 cities around the world.

So what happens to the technology now? VatorNews has reached out to Google to find out what the Jetpac team will be working on at Google, but a company spokesperson had no comment. The obvious answer, given the social aspect of what Jetpac was going, is for it to be incorporated some way into Google+, or to integrate into Google Maps.

Founded in 2011, Jetpac raised a $2.4 million funding round in 2012 from Khosla Ventures, Morado Venture Partners, and Jerry Yang.

Google has been on an absolute tear this year when it comes to acquisitions. Jetpac marks the 24th purchase the company has made so far in 2014.

And, of course, the company bought smart thermostat company Nest Labs for $3.2 billion, the most the company has ever spent on a startup acquisition. Nest has since bought two startups of its own to add to the Google family: energy monitoring platform MyEnergy and video-monitoring and security startup Dropcam.