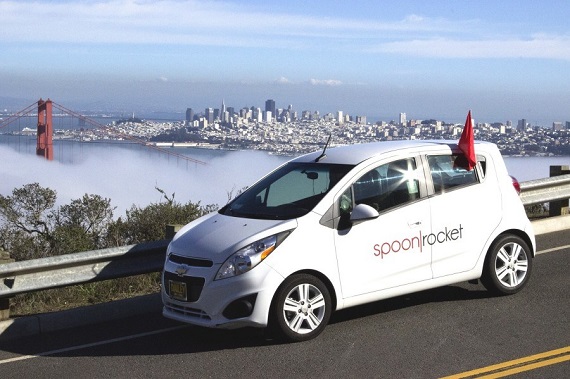 It's fair to say that there is no shortage of food delivery services on the Internet these days. Grubhub, Seamless, JustEat, Delivery Hero, even Yelp has gotten in on this. If you want food, you've got many ways of getting it.

So what would make a newer company in the space stand out? Try not only unique, curated food, with a daily changing menu, but no delivery fees and quicker delivery times than any other service.

That is what SpoonRocket says it offers its customers. And now the company has raised an additional $11 million in funding to continue making that goal a reality, the company announced in a blog post on Thursday.

SpoonRocket had previously raised $2.5 million in seed funding from FundersClub, Y Combinator, Garry Tan and Alexis Ohanian. This round brings its total raised to $13.5 million.

Founded in June of 2013, SpoonRocket offers four fresh cooked food meals per day (two vegetarian, and two non-vegetarian) that are priced at $8 apiece. The company is able to deliver the food in 10 minutes or less, as all the food is produced in-house and drivers are able to carry around meals for multiple customers at once, Steven Hsiao, CEO and co-founder of SpoonRocket, explained to me.

"You know how Uber is the taxi button on your phone? We’re the food button," he said. "What we're doing is really magical. We are the first company to deliver a physical product, in this case food, in 10 minute or less."

The simplified menu also helps keeps costs down, he said, noting in that in his previous business, also a food delivery service, there were 200 menu items offered.

"That became really problematic, so we understood that condensing the menu, and streamlining the service, would allow us to have the economy of sales we need." Those cost saving then get translated into the low price of the food, which allows "anybody, from any social economic background" to have access to the service.

The new money will go toward building out the company's employee base. It currently has 50 employees, and plans to add another 30 by the end of the year, including a team to improve operations and logistics, and engineers to improve the software, along with more culinary talent.

"We've done a great job at building a great business, now we have to refine it and understand it," Hsiao told me.

In addition to the funding, SpoonRocket also announced that it has hired Barney Brown, formerly the Executive Chef of the Rotunda Neiman Marcus, as its new Senior Executive Chef.

"For him, as with any chef, it is the amount of creativity and passion that they can put into developing a daily changing menu," said Hsiao. "Over time he is going to develop great recipes to serve to our customer base."

Headquartered in Berkeley, SpoonRocket currently operates in four cities in the East Bay from 10am to midnight. It also operates in San Francisco, but only during lunch hours from 11am to 2pm.