The growing field of agriculture technology

Farmers will end up at the forefront of drone technology 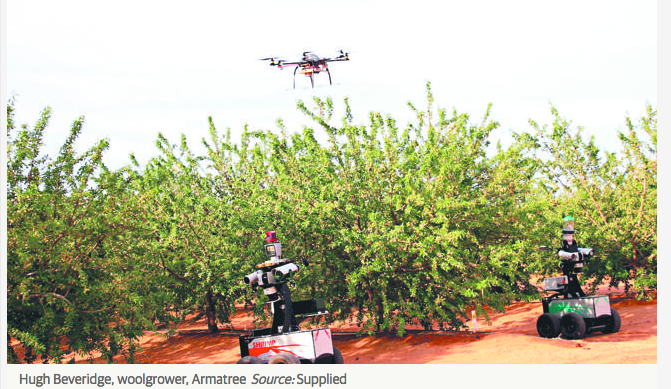 The conference rooms of Silicon Valley might seem like an unlikely place to hear talk of crops, soil, animal tracking and farm management, but a widening group of techies and investors see the potential of applying the Silicon Valley formula to California’s largest industry—agriculture—and are aggressively seeking out the new opportunities.

There are signs that this reluctance to invest in agriculture technology may be disappearing. In
early 2014, Blue River Technology, a business focusing on the use of computer vision and robotics in agriculture, raised $10 million in Series A-1 funding. In 2013, Climate Corp captured the headlines when Monsanto acquired the company for $930 million. Climate Corp, a company founded by early Google employees, provides a platform on which buyers can state the weather conditions they want to insure against and receive a quote within seconds. Climate Corp does this by utilizing weather measurements from 2.5 million locations and 150 billion soil observations to generate 10 trillion weather simulation data points.

Agfunder.com launched in 2013 as a type of “Kickstarter for Agriculture Technology” to help raise money for interesting new ventures in the field.The Silicon Valley Ag Tech group (of which the author is a member) hosts meetings, webinars, and conferences in an attempt to bring the farming and technology industries together to develop exciting and useful new technologies.

So where are the opportunities for start-ups in agriculture technology? The two main areas are Big Data and drone technology. Farmers have been using precision agriculture technologies since the invention of GPS, but recent developments in the field of Big Data could significantly increase the amount of data collected and help farmers use that data to improve yields. Of course, with Big Data comes concern over data ownership and privacy. A farmer’s data is likely to be more valuable than the typical consumer’s and there are concerns over how such data is being used. The American Farm Bureau Federation has advised farmers to consider data ownership implications when signing up for cloud-based services.

Drone technology is rapidly moving into the public eye and farmers will end up at the forefront of
this technology. In agriculture, drones could be used to gather even more data about a farmer’s land, distribute crops and pesticides, and even deliver spare parts to a tractor that has broken down in the middle of a field. Amazon recently grabbed the headlines with its plans to deliver packages via drones, however there are inherent safety concerns when using drones in built up areas.

Those safety concerns are substantially reduced when the drones are flying over large areas of unpopulated farmland, so agriculture may be the industry that takes drones into the mainstream. In addition to financial gain, start-ups in this space have a very real opportunity to contribute positively to society. According to the United Nations’ Food and Agriculture Organization, food production must increase by 60% to feed the Earth’s growing population which is expected to hit 9 billion by 2050.

Ninety percent of the growth in crop production is expected to come from higher yields on existing farm land requiring farmers to gain additional efficiencies from their land. This is where agriculture technology comes in. Agriculture technology is an exciting space ripe for further investment and those start-ups that can improve the industry may find venture capital firms are now willing to listen.