Zulip, which is still in beta, lets users to share public and private messages with their co-workers 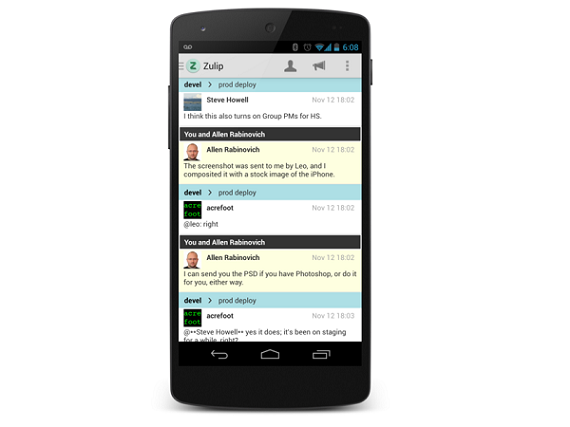 The company has apparently purchased workplace chat app Zulip. The news was sent out to Zulip users in an e-mail on Monday, which was first obtained by TechCrunch, then posted to Pastebin on Monday night.

In the message the company asked its recipients to "keep it secret," obviously something that not everyone did.

"Here's the deal: Dropbox is acquiring Zulip," the company wrote. "We're incredibly excited about working with an awesome group of people on a problem with huge scale, at a company that's as passionate as we are about helping people work together efficiently."

"Please use all of the same channels to reach us with questions. As we make progress on integrating with Dropbox, I'm sure that we'll have more announcements about what the product roadmap looks like going forward."

It once again asked users not to share the news, which it said would be coming out  "publicly in a few weeks." Apparently the best way to keep a secret is not to send out a mass e-mail to a whole bunch of people!

VatorNews has reached out to Dropbox for confirmation, but a company spokesperson would only say, "We have nothing further to share at this time.”

Zulip, which is still in beta mode, is an app that allowed users to share messages both public and private, with their co-workers. The messages could either be streamed, which would allow them to include multiple members of a team, or made private, which presumably would have only allowed two members to communicate without the others knowing.

Messages could also be broken down into categories, and subcategories. Below is a screenshot from Zulip's website of its Windows app:

The company has an app on both iOS and Android, as well as Mac, and Linux as well.

If the deal goes through, it is unknown at this time whether or not the app would remain independent, if it would be integrated into Dropbox or if the purchase would be an acqui-hire. Considering that Zulip has not even launched yet, the third option seems to be the most likely outcome.

Dropbox is rumored to be an IPO candidate for 2014. The company recently raised $350 million of a Series C offering, which worth as much as $450 million, at a $10 billion valuation.

That latest round pushed its total fundraising to $607 million in total.