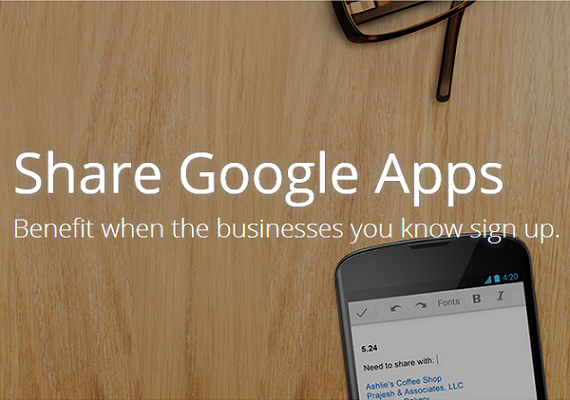 I was recently joking to a friend of mine that I wished we still lived in an age where people just blindly believed whatever ads told them and they could just blatantly make stuff up.

Of course I was being facetious. Honestly, I don't really know that anyone ever thought that ads that had doctors saying that drinking beer and smoking cigarettes were good for you ever fell for it. (I mean, I know there are things we people did not know back then, but come on!)

All I know is, now, word of mouth seems to mean a lot more than whatever a company tries to hook you with. We're probably more cynical, but also more discerning and more informed.

Google has gotten the message loud and clear that the opinions of others carry a lot of weight and so, rather than try to tell new customers that its enterprise apps are amazing, it is going to have its current customers do it for them!

The Google Apps Referral Program, which was unveiled on Monday, allows current users of the business-targeted Google Apps, which includes Docs, Hangouts, Gmail and Drive, to recommend them to other businesses in their network.

In return for each new user that signs up, the one who referred them gets a cool $15. All the user has to do is provide Google with a  valid taxpayer ID number and a bank account to receive direct deposits, then they will receive a unique referral link after registering that they can share with those they want to refer.

"For those of us who use Google Apps, the ability to access all of our documents from anywhere on any device and being able to seamlessly collaborate with colleagues or customers across the world, are impressive moments," Prajesh Parekh, Google Apps Marketing, wrote in a blog post.

"Many of the millions of Google Apps customers learned about tools like Hangouts, Drive and Gmail for business from their customers, friends and networks."

While users can refer an unlimited number of businesses, but they will only earn a maximum of $15,000, or $15 for the referred company’s first 100 users who have paid for at least 120 days. Google is also giving out coupons that save those referrals $10 per user for the first year, as well as additional coupons as they continue ti refer more customers.

I image that, ultimately, this type of word of mouth advertising will be a lot cheaper for Google than running a big, expensive, multi-screen ad campaign. The program is currently available to people in the US and Canada.