MasterCard gets into the in-app payments space 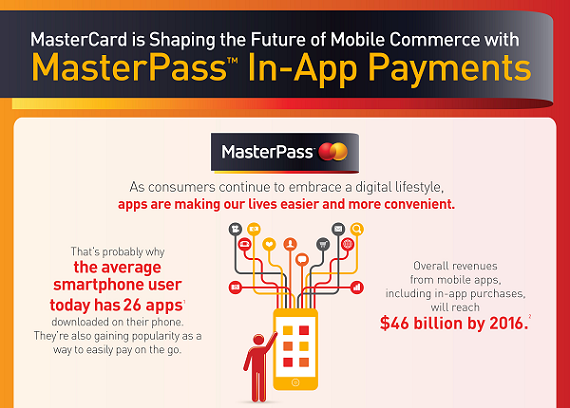 I remember when I bought my first iPhone, and the guy who sold it to me asked me what apps I was planning to download. I said that I was basically only going to use it for checking my e-mail and Facebook, and maybe a few other things, but not that many.

Cut to a few years later and I have way too many apps on my phone. Games that sounded cool but I never play anymore, along Google search, Wikipedia, Fandango, OpenTable, etc. I spend a huge chunk of my time now looking at apps.

Companies like Stripe and Braintree already figured out that there was money to be made there. Now MasterCard would like to make some money off that time as well, please.

The credit card company is extending its virtual online wallet payment system, MasterPass, to be embedded into a number of apps, which will enable in-app payments, it was announced at the Mobile World Congress in Barcelona on Sunday.

Prior to this, the system was only available for for embedding directly into browsers.

Among the first app providers that were chosen to  power their in-app purchasing capabilities with MasterPass are Forbes Digital Commerce, Fat Zebra, MLB Advanced Media, NoQ, Starbucks Australia and Shaw Theatres Singapore. It has already been successfully implemented at more than 30,000 MasterPass merchants to date in Australia, Canada, Italy, the United Kingdom and the United States.

The service will be made available to all developers and merchants beginning in the second quarter of this year.

"We’re creating great experiences for consumers across all channels and all devices, and enabling merchants to reach new consumers in ways not possible in the pre-digital world,” Ed McLaughlin, Chief Emerging Payments Officer at MasterCard, said in a statement.

“We’re also developing a framework to make all payments using MasterPass as or more secure than anything we can do on cards today, ensuring that consumers can benefit from the highest possible levels of security.”

Of course, this type of integration requires some expertise in the space, and so MasterCard also announced on Sunday that it is going to purchase C-SAM, a provider of mobile wallet and on-device software and services.

No terms of the deal were disclosed, but MasterCard made it clear where the team's talents will be going.

"In acquiring C-SAM, MasterCard will speed the development and deployment of mobile wallets and payment solutions globally, including the rollout of its MasterPass digital service," it said in the press release.

Founded in 1998, C-SAM was behind commercial mobile payments services countries like in India, Japan, Mexico, Singapore, the United States and Vietnam, for companies like ISIS, Starhub and DNP.

MasterCard and C-SAM had already forged a global strategic partnership in December 2012, and MasterCard had a minority investment in the company as well. The acquisition is expected to close in the first quarter of this year.