Diners will be able to pay directly from their phones via credit card, with no swiping or scanning 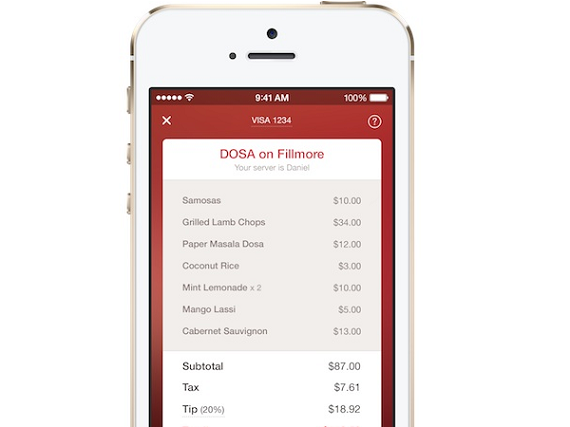 If you've ever taken Uber, you'll know the convenience of just getting out of the car without having to fuss with cash or a credit card and figuring out a tip to boot. Now that convenience is moving to your restaurant bill.

OpenTable is launching a new pilot program that will allow users to pay directly from their phones, the company announced.

"First, OpenTable made it simple to book a restaurant reservation at any time of day or night with just a few clicks. Now, we’re pleased to announce that it will soon be just as easy to pay for your meal," Kashyap Deorah, General Manager of Payments at OpenTable, wrote in a blog post.

"Rather than waiting for a check or, worse yet, being late for the theater, with the new OpenTable payments feature, you will be able to tap to pay – and be on your way."

Here's how it works: certain diners will receive an email invitation to be part of the program. After making a reservation at a participating restaurant, users can now add a credit card in the OpenTable iPhone app before your meal. Once they have finished, they will be able to view and pay the check with no scanning, or bar codes, involved.

For those participating, they will also be asked to give feedback about the service, and some may also get the chance to participate in in-person question and answer discussions at OpenTable's headquarter in San Francisco.

Right now the new feature is only being tested out on Android, but Caroline Potter is the Chief Dining Officer for OpenTable, comments that she hopes to be able to expand to Android at some point after the pilot program is over.

This seems like a pretty no-brainer move for OpenTable, which is the largest restaurant reservation service on the planet.

Becoming a payments processor would seem to be a new way for OpenTable to make money, but the company says that it isdesigned to be a free service for both the restaurants and customers.

"Mobile is the cornerstone of powering great dining experiences.  And incorporating mobile payments into our app is another way we can help restaurants deliver extraordinary hospitality to their guests," OpenTable CEO Matthew Roberts said in a statement supplied to VatorNews.

There are other companies out there that offer similar services, including LevelUp, but even that company requires the merchants to rent out a scanner. The OpenTable program does it straight from the phone, and requires no equipment from the restaurant.

OpenTable also has an advantage when it comes to the sheer number of restaurants that it already has a relationship with.

With an installed restaurant base of nearly 31,000 around the world, and more than half of all the reservation-taking restaurants in the United States, it basically has a monopoly on the online-reservation space. These places are already paying OpenTable fees for getting people in the door; now they are going to start paying to get them out.