Showcase Pages lets businesses gain more followers, then they can recruit them with Talent Updates 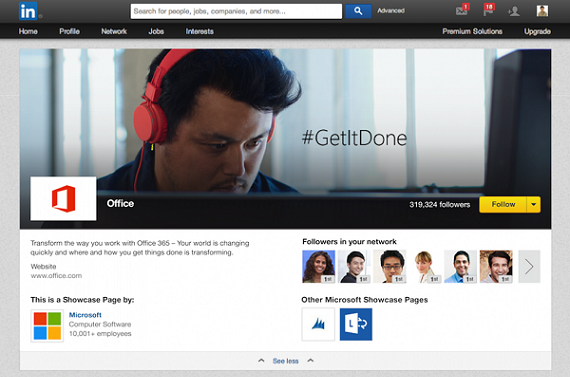 LinkedIn seems to have two big goals right now: become a better publishing platform for its users, and also help its business clients build better relationships to those users, who they can then recruit later on.

Now the company is debuting a couple of new features, which will help the company accomplish both of these goals.

The first feature is called Showcase Pages, and it allows companies to highlight certain aspects of their business, which users can then follow, just like they can for Company Pages, it was announced on Tuesday.

The point of these pages is to better target what users are actually interested in, while also allowing the businesses to show off what they are most proud of.

Ultimately, the idea seems to be to get users to interact with these companies on LinkedIn, so that they can then be recruited later on. That is why LinkedIn debuted another feature on Tuesday, called Talent Solutions, which helps businesses turn their followers into potential employees.

With this feature, companies can share status updates, including recruiting events, company blog posts and employee videos, with their followers. The updates will appear on the follower's homepage feed, in their mobile feed and directly on the Company Page.

Businesses can even see who liked, shared or comment on the updates, so that they can they contact them as a potential hire.

It is wise for LinkedIn to focus on the recruiting aspect of the business, as more than half of its revenue comes from there.

In it third quarter earnings, Talent Solutions took in $224.7 million, or 57% of LinkedIn's total revenue. That was up 62% from a year ago, when it accounted for 55% of total revenue.

"Ultimately, Talent Updates are a powerful a way to reach passive candidates who have opted-in to hear from you in a format that’s comfortable for them," LinkedIn explained. They are only available in English for the time being,.

The question is, though, will this actually help businesses recruit? Some part of me is skeptical about that.

Just because I follow a company, or even comment and like its blog posts, does not mean I want to necessarily work there. Personally, it just seems like a bit of a leap to me.

As I mentioned before, there is another aspect to this: LinkedIn becoming a publishing platform.

For a long time, LinkedIn had an issue with retention, so it did the smart thing: become a platform for new, and interesting content that will make people not only want to come to the site, but stay.

That initiative included the introduction of "influencers," or important people who users could follow, as well as the acquisition of news aggregation app Pulse in April.

Earlier this week, Pulse was finally integrated into LinkedIn, replacing LinkedIn Today, in order to give users personalized recommendations for content. It makes it LinkedIn more social, by allowing users like and comment on Pulse activity, which will then show up on their LinkedIn page.

Showcase Pages are the next step in that direction, giving users more focused content that they will really be interested in engaging with.

They are free for businesses to set up, and they will also be able to monitor the performance of their Showcase Page through LinkedIn's analytic tools.