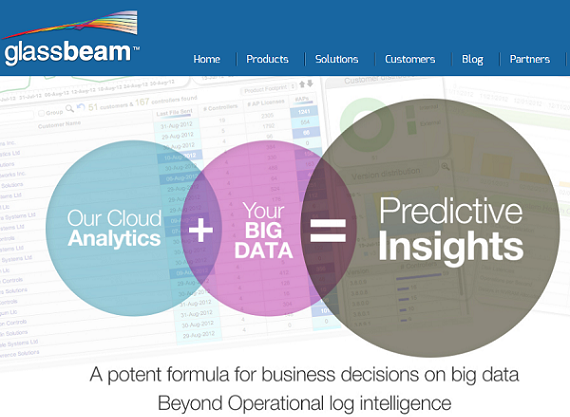 Glassbeam, a machine data analytics company,  has secured $3 million in angel funding, it was announced Thursday. The new funding was led by VKRM Group, and it brings the company's total funding to $6.1 million.

The investment will be used, in part, to fuel product innovation. In the next few weeks, the company will be launching a "high level next generation platform that will be able to provide 50 times the scalability" that the current platform does, Puneet Pandit, CEO and founder of Glassbeam, told me in an interview.

"This will enable us to go deeper into analytics," he said. "As data is groing faster, our customers need to store data in the cloud for historical analytics for months, and maybe years."

The new platform will be able to handle terabytes of data on a daily or weekly basis.

The money will also go toward building a dedicated Data Science team to help customers improve intelligence and analytics through the use of machine data.

"Data science will be a new initative for us," said Pandit. The company plans to hire two or three employees with a specialty in data science in next three to six months, and that number should grow to five or 10 by next year.

Finally, Glassbeam also announced that it is going to be expanding its offices in the U.S. and India to new locations by end of year.

The Sunnyvale, California-based Glassbeam, which launched in 2009, provides a software-as-a-service solution for product analytics. It is focused on helping companies to make sense of machine data so they can better understand deployments and troubleshoot problems.

For example, one of Glassbeam's customers is IBM, which has multiple product lines, including 8 to 10 products in the storage market.

IBM has thousands of devices generating machine data, but it was "very unstructured," said Pandit. "So now groups inside IBM are using Glassbeam on a daily basis to tell them how those devices are working or not working. Glassbeam gives them analytics such as storage capacity, storage usage after 90 days and cpu usage after 30 days.

For example, if there is a major problem with two or three machines, the product engineers can use Glassbeam to log on and understand the current configuration of the system, and see the settings from the last 24 to 48 hours. This information then helps the engineer diagnose problems, thereby increasing customer satisfaction.

Glassbeam customers include enterprises across a variety of markets, including storage, wireless, networking and medical devices.

"There are two segments in this space," Pandit told me. "There is machine data for IT, and machine data for the IoT, Internet of Things, market. We play more in the second category, and work with device manufacturers."

Not many other companies are tending to the IoT side of the business, which, he said, is much more complex than the IT market. So, right now, Glassbeam's main competition is their customers "trying to build in house."

'They struggle massively, and spend a lot of time and money before they come to Glassbeam," he said.

Eventually he does expect more competition to emerge, "once the market heats up." And that will happen over the next five to 10 years, when there will be a "massive data explosion from these devices and things."

The ultimate goals of Glassbeam are twofold: one, to build a cloud based platform that is accessible from any device, any place and at any time. And two, to take data from any kind of device and turn it into quick actionable information.

By using Glassbeam, companies can save 20% in time trying to diagnose a problem, so a job that would have taken four hours, will now take two or three hours, if not less.

Glassbeam also helps companies make money through the reselling of the analytics it provides on those machines and devices. The companies sell them to their customers, and Glassbeam takes 50% to 70% revenue share in the profits.