In a big to take more clients away from Yammer, Convo gets fueled up 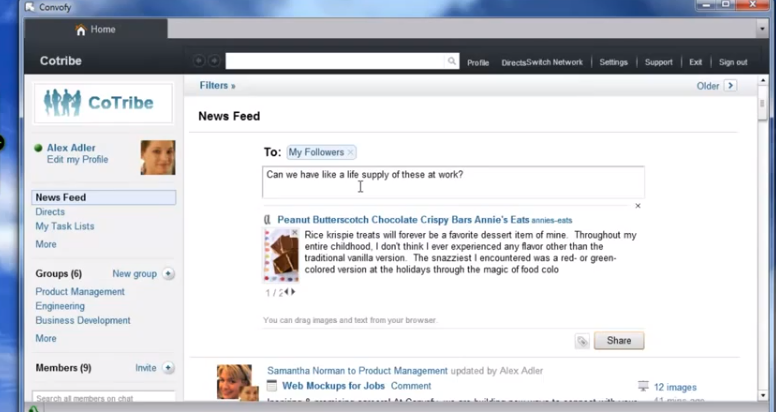 Collaboration software for enterprises is a big market opportunity. Just look at Yammer, which was bought for $1.2 billion by Microsoft last year. One company, Convo, is setting its sites on taking away Yammer's customers and while it's not raised as much as Yammer and isn't backed by deep-pocketed Microsoft to declare all out war, it's off to a good start.

Collaboration platform provider Convo announced it's raised a $5 million Series A investment from Morgenthaler Ventures. San Francisco-based Convo, which launched as an enterprise communications app in April 2012, actually got its start back in 2007 as Scrybe, a calendar and listing company based in Pakistan. Clearly, it's come a long way.

"Since April [last year], we've had more than 6,000 businesses signed up," said Faizan Buzdar, founder and CEO of Convo. The company lists a broad range of companies as its enterprise clients, such as Oxford Leadership Academy, a global consulting company, NXP (semiconductor company), Jones Lang Lasalle (real estate company) but it sees a lot of engagement from news publications.

In that use case, editors and writers can come together to manage and collaborate on stories. For a company like TechCrunch, a customer of Convo, engagement is very high, said Buzdar. "For TechCrunch, we see 7,000 posts a week on Convo."

The average session for all Convo clients is more than eight hours, he added.

The collaboration features are very cool, have utility, offer efficiency in the workplace and are easy to use. But it's not free.

For smaller companies, the cost is $9 per user. For companies above 200, the cost moves up to $19 per user.  The cost doesn't seem unreasonable, however. And with 6,000 customers signed up in 18 months, it's clear Convo is doing something right.

"When customers move to us, they completely stop paying for Yammer," said Buzdar. "Yammer was a great company and they spent a majority of the time creating awareness for the category... and that’s helped us spend most of our time on the product."

So how is Convo different from competitors like Yammer or Salesforce's Chatter?

Here's what the company provided in its FAQs:

Facebook and Twitter's success has created this awareness, acceptance that the news feed is the most efficient way to share information, you will see that pattern repeated across all sorts of apps and it is sort of old news now. So where we do have familiar news feed that we think is closer to Facebook and even Friendfeed than to Yammer, that isn't our main technology offering. That is the invisible technology that gets out of your way.

Our special sauce is in our deep impactful collaboration innovations that lets you get your meaning across far more easily than anywhere else. So say you are talking about a 50 page PDF contract and want to correct something, all you have to do is select some text and say "this one". Everyone gets the right message really fast! Our customers are very happy with that.

We have a ton of small ideas embedded into the core of the product, algorithms on the news feed that always gets you relevant recent content etc. that makes up the whole package.