Belly. which offers rewards to repeat customers, is used by 6,500 merchants around the country 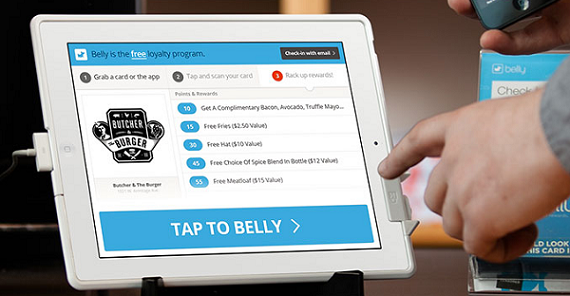 As anyone who has ever visited a city like New York or Chicago can tell you, there are an infinite number of places to eat. That was actually one of my favorite things about living in a big city: there was always a new place to try. So how does a store compete in that market? By rewarding its valued customers, giving people an incentive to keep coming back.

Customer loyalty and marketing platform Belly has raised a new $12.1 million round of funding, the company announced Wednesday.

The round, which is is the initial tranche of the company's Series B round of venture capital financing, included previous investors Andresseen Horowitz and Lightbank, and added venture investors NEA and DAG Ventures. Strategic investors added to the round included Cisco Systems and 7-Eleven.

The company previously raised a seed round of $375,000 in September 2011 from Lightbank, a Chicago based VC firm focused on high-growth, scalable technology investments, and then a $1 million convertible note from Lightbank in November 2011 and February 2012.  That was followed by a $10 million Series B in May of 2012 from Andreessen Horowitz. This round has brought Belly's total investment to just under $30 million.

With this new funding, Belly says it will be expanding its core product offering, as well as becoming the leader in the customer loyalty marketplace.

Founded just two years ago, the Chicago-based Belly is a small business and consumer-focused rewards system that motivates shoppers with returns that have been crafted by each store to fit their special skills.

The company partners closely with each business to offer a loyalty program that fits the businesses’ personality, culture, brand, and business objectives. Customers can either use a physical card or mobile app to scan in on the Belly provided in-store iPad to earn points redeemable for customized and engaging rewards.

To give you an example of how it works: one of the company's partners is McDonalds. Belly's users earn rewards by eating there in Chicago, and once they reach a certain number they will get a reward. These include a fresh baked cookie for 10 points, a free extra value meal for 70 points, two free extra value meals at 100 points, and a donation of $100 to The Ronald McDonald House once the customer reaches the highest level of 350 points.

Other high end rewards have included: lunch for four at Subway for 175 points; an ice cream date with Jerry from Ben & Jerry's for 1,000 points; and the chance to name a Slurpee flavor at 7-11 for one month for 250 points.

“While we’re impressed with the adoption of Belly’s core product of customer loyalty, it’s the depth of the consumer interaction Belly fosters that most excites us,” Tom Grossi, partner at NEA, said in a statement. “Belly’s in-store tablets are becoming a gateway for its merchants to initiate lasting connections with their customers, gaining valuable feedback while enhancing those relationships in between visits.”

Belly is now used by over 6,500 merchants, and has over 2 million users, adding four to six thousand every day. It has seen 15 million check-ins, or around 50 to 60 thousand a day.

It is available in markets all over the country, including Chicago, Austin, Washington D.C., New York City, Boston, Philadelphia, San Francisco, Los Angeles, Cleveland and Atlanta. 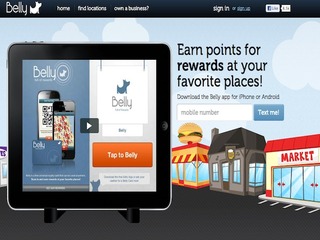 Belly fastens on $10M to build an eccentric loyalty app