Users can now access more information, such as jobs, companies and groups 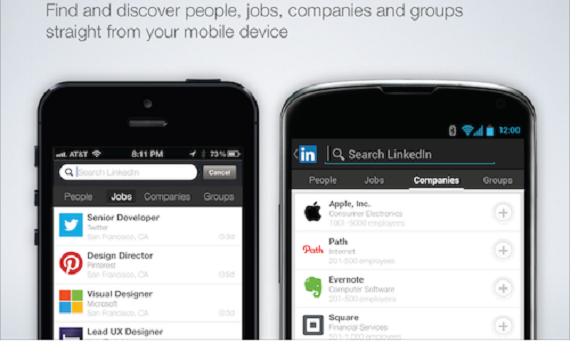 A few months after debuting a totally redesigned mobile app, LinkedIn has gone ahead and beefed up the app's search capabilities to continue its transisition to being a mobile first network.

Starting today, users will have be abilile to not only search for people but for jobs, companies and groups as well, the company revealed in a blog post Tuesday.

"Mobile is all about those 'in between' moments throughout your day. Whether you are waiting for a meeting to start, catching a ride or waiting in line, the LinkedIn mobile app will help you get the most professional value out of those mundane moments," Tomer Collins, Product Lead for Mobile, wrote.

While there is some part of me that still wonders how much time an average person actually spend on LinkedIn, and if mobile is really the way to go for a network that most people still tell me they use pretty infrequently, LinkedIn highlights three different ways that its userbase can take advantage of being able to search for more on the go:

For example, LinkedIn says, a person might be meeting with someone at Microsoft, so the app can now be used to not only look that person up, but also look up the Microsoft Company Page, as well as search for specific products, such as the Microsoft Surface group. Then, it can be used to possibly seach for jobs at Microsoft.

(All of this assumes, of course, that you did not do any of your research beforehand and that you simply cannot wait to get home before looking up new career opportunities. But I digress).

In addition, the app can also get up-to-the-minute professional intel, meaning LinkedIn members can make sure to get the latest competitive intelligence or timely news, which can help them be the most informed person at their next meeting. This includes industry news, access advice from the top minds in business, or seeing who has joined a new company or received a promotion.

Finally, it will allow users to save time by customizing your app navigation with personalized shortcuts. If a LinkedIn member is doing business with a new company, for example, it can add that easily add that company to its favorites to get updates. There are additional shortcuts for News, Groups, Jobs, People You May Know, Who’s Viewed Your Profile, and Your Recent Activity.

The focus with this update is definitely on speed and being user-friendly (does anyone still use that term, or did it die in the late 90s?).

Like all social networks, and Facebook especially, mobile is the key to staying relevant. And LinkedIn has been making a name for itself in the space recently.

In addition to the updates mobile app, which came with a new design, a more tailored experience and a new visual stream that comes with tailored updates, news, original posts from Influencers, LinkedIn has also made some key mobile purchases this year as well.

In March Linked purchased news aggregation app Pulse for $90 million, in oder to give users more control over the kinds of recommended content they receive. Then, in May, the company acqui-hired the team behind social decision-making service Maybe, which was a service that helped people organize all of your decisions and get help in making them.

LinkedIn's mobile strategy does seem to be working, as its userbase seems to be quickly flocking there.

In its latest quartely earnings report, LinkedIn said its unique mobile members grew 29% year to year. Mobile remains the company’s fastest growing consumer service, with an average of 30% of unique members coming to mobile apps in the first quarter, compared to 19% a year before.

LinkedIn is obviously focusing on mobile for the foreseeable future, and so you should expect more updates in the weeks and months to come.