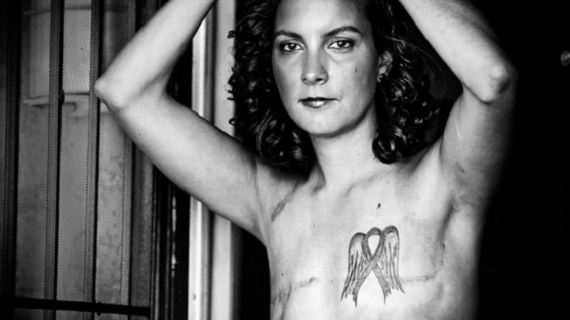 Here is a quick life lesson: there are a few groups out there that you really just don't want to mess with. These are groups so popular that, even if you are in theright, you will probably just wind up losing anyway.These groups include: 9/11 first responders; war widows; puppies; kittens; babies; and cancer survivors.

Seriously. DO NOT pick a fight with these people. It is not worth the trouble, and bad press, it will cause you.

Facebook must have missed that memo, though, and is now, apparently, picking a fight with one of the aforementioned groups, namely cancer survivors. My prediction: this will not end well for Facebook.

So what exactly is Facebook doing to potentially piss them off?

The social media site is "censoring photos of men and women who have undergone mastectomies," at least according to a Change.org petition started by breast cancer survivor Scorchy Barrington.

In the petiton, Barrington specifically points to the SCAR Project, a series of large-scale portraits of young breast cancer survivors shot by photographer David Jay.

The SCAR project's mission is to "raise public consciousness of early-onset breast cancer, and to help young survivors see their scars, faces, figures and experiences through a new, honest and ultimately empowering lens," Barrington wrote in an open letter to Facebook CEO Mark Zuckberg and COO Sheryl Sandberg.

And yet Facebook has been removing photos from The SCAR Project page, and even banned Jay from posting on the site for 30 days, she said.

"Facebook says these photos violate their policy -- essentially putting these images in the same category as pornography. The Scar Project, Stupid Dumb Breast Cancer, and other pages like them do not objectify or sexualize the human anatomy. They document the physical and emotional toll of women and men who have undergone mastectomies. They raise awareness of the disease and reinforce the need for early intervention and research toward a cure. This is the reality of breast cancer. BREAST CANCER IS NOT A PINK RIBBON."

While this obviously does not make Facebook look very good, it should be noted that the social network does have a specific policy to allow photos of mastectomies to be shown. The problems arise with those pictures that show "fully exposed breasts."

"We agree that it's important and valuable to raise awareness around the mastectomy process, and for people to be able to share experiences from illness and recovery. The vast majority of these kinds of photos are compliant with our policies," the company says on its community standards page.

"However, photos with fully exposed breasts, particularly if they're unaffected by surgery, do violate Facebook's Terms. These policies are based on the same standards which apply to television and print media, and that govern sites with a significant number of young people."

In a statement to VatorNews, Facebook defended itself by saying that they only review photos that have been reported, and that some may have been taken down "by mistake."

"We have long allowed mastectomy photos to be shared on Facebook, as well as educational and scientific photos of the human body and photos of women breastfeeding. We only review or remove photos after they have been reported to us by people who see the images in their News Feeds or otherwise discover them. On occasion, we may remove a photo showing mastectomy scarring either by mistake, as our teams review millions of pieces of content daily, or because a photo has violated our terms for other reasons. As a reminder, our terms stipulate that we generally do not allow nudity, with some exceptions as laid out above and here, consistent with other platforms that have many young users," a Facebook spokesperson told VatorNews.

"We have been in touch with leaders of organizations that seek to promote greater understanding of, and support for, those who have had mastectomies. We are supportive of their work and will continue to work with them to ensure that even as we review millions of pieces of photos and content, we are also doing our best to make the right and best decisions as they pertain to photos."

It would be nice to be able to give Facebook the benefit of the doubt here, especially considering that they specifically say that these types of photos are allowed on the site.

Either way, though, Barrington already seems to be winning her cause: the petition already has 7,726 supporters, and that number is going up quickly.