iPhone 5 and 4S triumph as most popular phones in Q4

The two devices captured over 20% of the market, but iOS still lags behind Android due to closed OS 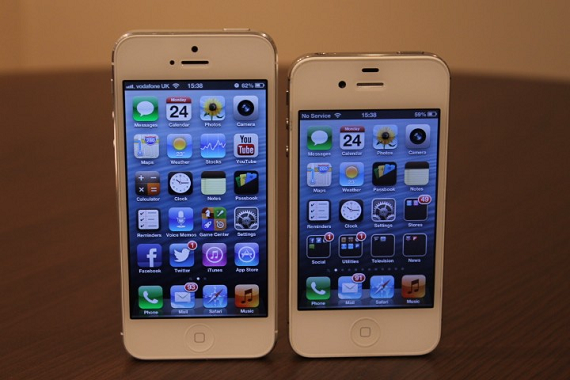 I recently finished reading Walter Isaacson's biography of Steve Jobs and one of the most interesting aspects of the book to me was his war with Bill Gates over open versus closed operating systems.

Windows, of course, licensed its software to anyone who wanted it during the 80s and 90s, and made huge profits. Apple, on the other hand, kept the hardware and software as one. What this ultimately means is that Apple would have great products, and might even sell a lot of hardware, but never really be able to outsell the rival software.

This is what has happened in the smartphone market, where Apple outsells its individual hardware competitors, but is losing to its biggest software rival, Android.

The iPhone 5 and 4S were the two best selling smartphones in the fourth quarter of 2012, according to a report by Strategy Analytics Wednesday.

The only phone to come close was Samsung’s Galaxy S3, which shipped 15.4 million units globally, capturing 7.1% share in the quarter. 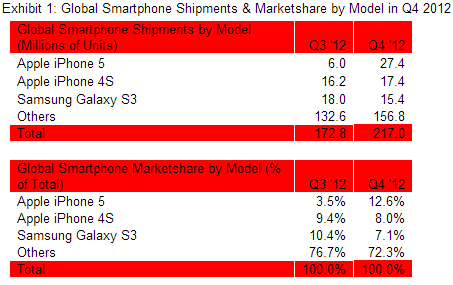 "Samsung’s Galaxy S3 has long proven wildly popular with consumers and operators across North America, Europe and Asia. However, global demand for the Galaxy S3 appears to have peaked and Samsung will surely be keen to introduce its rumored Galaxy S4 upgrade in the coming weeks to fight back against Apple’s popular iPhone range," Strategy Analytics wrote in its report

Despite outselling all other hardware competitors, though, Apple still lags behind Android devices overall in global marketshare.

Android and iOS combined for a total of 91.1% of all smartphone shipments during the fourth quarter of 2012, with Android accounting for 70.1% of the market, shipping 158.9 million units, according to the International Data Corporation. That is compared to the 47.8 billion units shipping by Apple, which accounted for 21% of the market,

Google also trounced Apple for share of mobile revenue in 2012.

Google holds an even bigger percentage of the market, with 53% share of revenue, compared with only 3.2% for Apple. Google was projected to see over $2 billion in ad sales in 2012, while Apple would see only $123.8 million.

This is the deal that Apple has made: if it is going to have a closed system, it will get to keep its operating system only on phones it approves of, and will get more control over the user experience. The flip side of that is that even if it sells the most phones, it will ultimately lose due to the huge proliferation of other phones that can use the Android operating system.