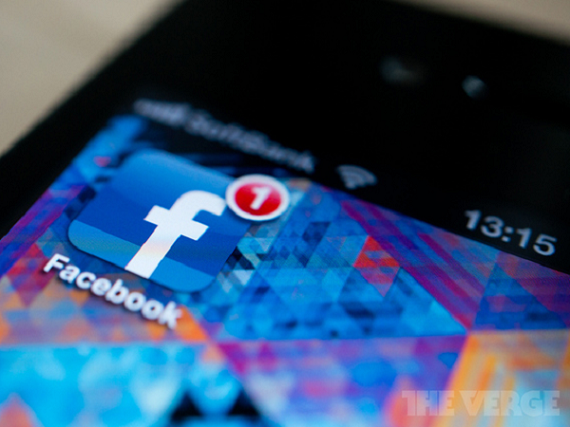 After years and years of every being proclaimed as the “year of mobile,” it finally happened in 2012. Mobile ad revenue went through the roof this year, and a major contributing factor in that growth was Facebook finally finding a way to make some money off its native app.

Mobile ad spending in the United States, which encompasses, display, search and messaging-based ads to phones and tablets, will hit $4 billion this year, an increase of 180% from 2011, according to a study released by eMarketer Monday. In September, eMarketer had projected growth of only 80% this year.

While percentage change is expected to drop, the actual amount of revenue is only expected to grow from there. In 2013, eMarketer expects to see $7.19 billion, and then nearly $21 billion in mobile ad spending in 2016. 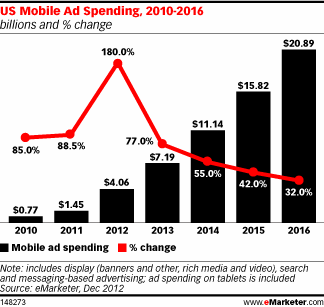 And the reason that spending is growing so quickly, eMarketer says, is because of native ad formats, like Facebook’s mobile news feeds ads and Twitter’s Promoted Products.

“These products represent a seamless experience across platforms for consumers – which means platform owners are able to successfully earn (or, in some cases, not lose) revenue as consumers continue to increase time spent on mobile devices with smaller screens unsuited to much of the inventory that accounts for the bulk desktop display advertising,” eMarketer wrote.

Facebook introduced mobile ads for apps, which will allow app developers to advertise on News Feeds on Facebook’s mobile app, in August.

Facebook “offered no mobile ad opportunities at the beginning of 2012 but grew its mobile business at an astonishing – and unexpected – rate,” eMarketer wrote, and it was its third quarter that has caused the firm to raise its expectations for the year.

As a result of the new ad model, eMarketer expects Facebook to see $339 million in ad revenue in 2012, behind only Google, which is projected to see over $2 billion in ad sales. Facebook's amount of ad revenue is expected to more than double next year. 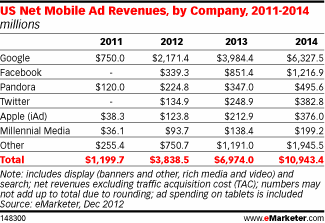 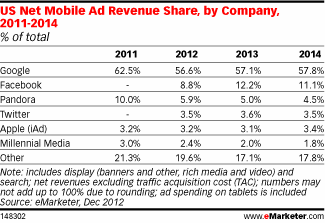 While advertising is on the rise, it is only a percentage of the money that can be made from mobile.

The cumulative revenue brought in by mobile apps, which includes pay-per-downloads, in-app purchases, subscriptions, and in-app advertisements, is expected to pass $30 billion this year, according to a report from market intelligence company ABI Research last month.

Apple and Google, ABI Research said, were responsible for turning apps into a major industry that will only continue to grow in the coming years. 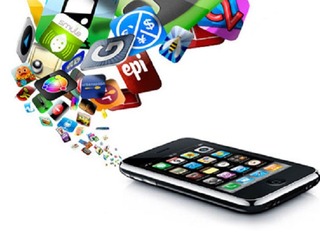 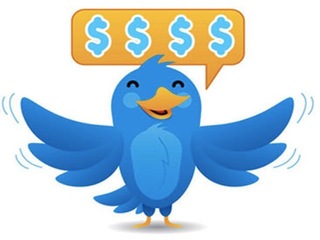