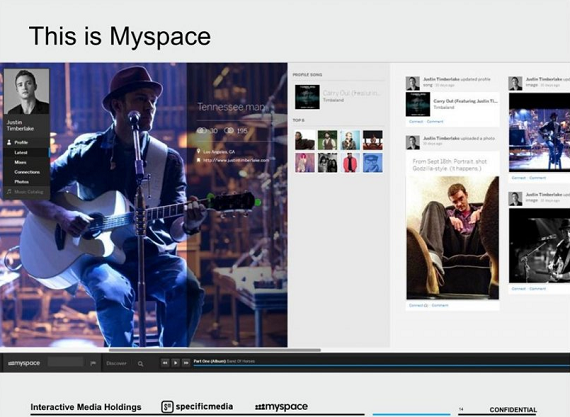 There’s been an odd word floating around lately. It’s something I used to hear about a lot about from people at some point but then everyone seemed to suddenly stop mentioning, as if they were trying to forget it ever existed. (Just writing that, I realized just how many different things I could be referring to. The Macarena. Paris Hilton. George W. Bush. And how long before we can add Gangnam Style to this list?)

In this case, I am referring to Myspace, the once powerful social media website that was all but decimated by Facebook in the latter part of the last decade. Recently, though, because of a Justin Timberlake endorsement, and a surprisingly well-received re-design, the service is getting some renewed interest.

Business Insider was somehow able to get its hands on a leaked presentation that shows how Myspace is doing this year (spoiler alert: not very well), how Specific Media, which purchased Myspace for $35 million last summer, projects it will do in the next few years (spoiler alert: a lot better!), and how it expects to get there: by turning Myspace into a music service, which will compete with Spotify.

According to the presentation, Myspace made only $15 million in revenue in 2012, and is on track to lose $43 million this year. Next year looks better, but not by much, with revenue expected to go up to $58 million, but with loses still expected to be $23 million.

In fact, though revenue will continue to rise, the website is not expected to make any profit at all until 2014. 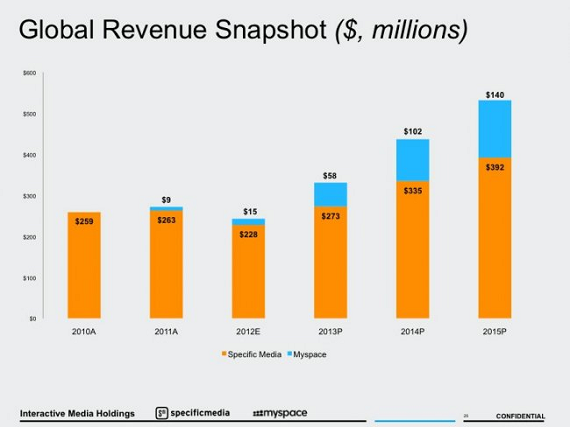 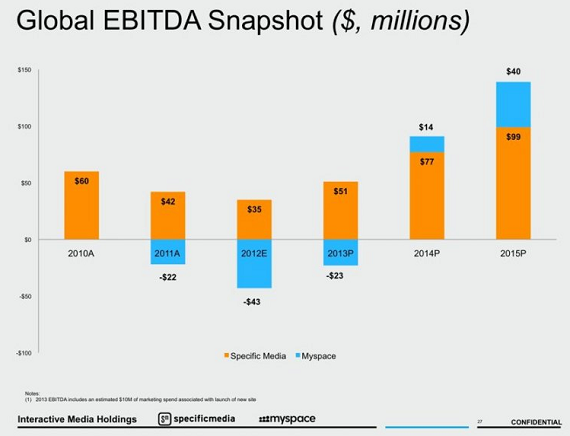 The website has also seen traffic go up by 36% since December of last year, and, because of its renewed focus on music, it is now the 44th largest website, and is also the fastest growing top 50 website in the United States.

The online music scene is a crowded, and ultra competative space right now, so you have to wonder if it is really the right move for Myspace right now. Companies like Microsoft, Nokia and Apple, and Spotify has to try to keep out in front of those nipping at its heels.
Pbs.99

Last month, Microsort unveiled Xbox Music, which was launched first on the Xbox console, then onto Windows 8 when it debuted on October 26.

Microsoft says that it has a few features coming up in the next year, including a scan-and-match feature, as well as social features.

Microsoft previously attempted to enter the music world with its failed Zune media store.
It was also reported in September that that Apple was in negotiations with music labels to create an Internet radio service, much like Pandora.

It was also reported in September that that Apple was in negotiations with music labels to create an Internet radio service, much like Pandora, though it was said that it would take months for Apple to have everything in place to launch such a service.

How will Myspace compete?

So what would Mypsace be able to bring to the table that no other service has? According to the presentation, it has "the largest music catalog in the world with 42M songs," and that it has relationships with five million artists. It also is the only company with music right to all the major, and independent labels, so it can stream their music. 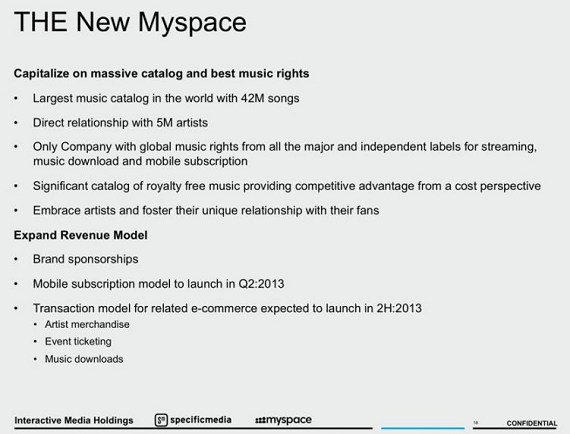 The service also would have an advantage over both Pandora and Spotify because it pays out less music streaming costs. The site has 27 million music tracks from unsigned artists, which accounts for more than 50% of its song plays, and for which is has a zero cost basis. 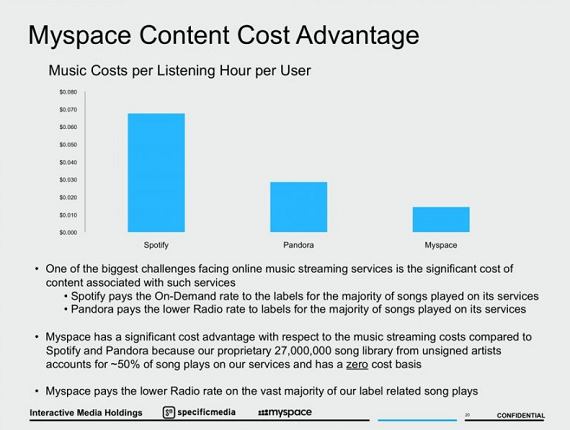 By having unsigned artists, Myspace seems like it will be at least one part of its old identity: it was always a good place to discover new talent, and hopefully it will become one again.