If you’ve gone on Facebook at all today, it’s been a madhouse of political activity. Nearly all of my friends have fallen into three categories today: the ones yelling at their friends to vote, the ones saying they are refusing to vote because of some crazy conspiracy theory, and the ones making fun of everyone else fighting about the election.

Of course, Facebook has encouraged all of this with some of its new features, including its Polling Place Locator and its U.S. Politics page, which highlights the use of Facebook by politicians, elected officials, and political campaigns.

Facebook's coolest election themed featured, though, is a heat map that allows you to see where people have voted in real time.

At the top of every Facebook page, for users 18 or older, there is a button, which says “I’m Voting”, or "I'm a Voter.” Once a users clicks this button, it will post a story to their Facebook Timeline telling their friends that they have voted.

The heat map displays a a real-time counter of people in the United States who have clicked the button. 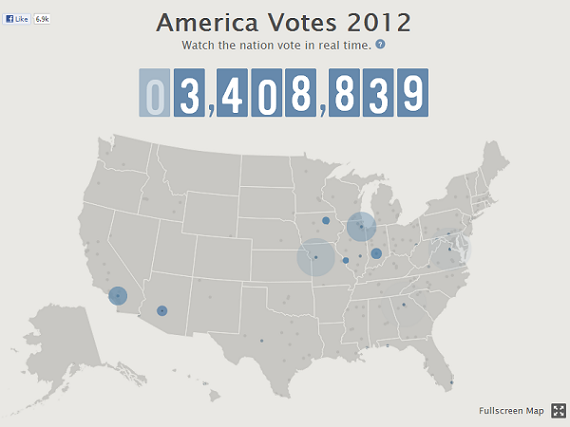 “The map displays bursts of activity as people share that they're voting. The size of each burst matches the number of people voting in that region right now. The histogram shows a record of activity over time, with an additional breakdown by gender and age,” Facebook says.

The map allows users to zoom in on a specific state, and also breaks down how many times the button was pushed per hour, by gender and by age.

As I am writing this, over 3.4 million people have clicked the button, and that number is growing quickly.

The number of female to male voters is almost two to one: 2,155,006 women to 1,116,493. The largest percentage that have clicked are those aged 24-34, with 32%, followed closely by 18-24 year olds, with 30%. The older demographics have less representation, but that is obviously because they are less active on Facebook. Still, I’m glad to see that the young people out there are doing their civic duty.

So besides being a cool representation of democracy in action, is there anything else to this? Actually, to probably everybody’s surprise, there is.

A recent study led by the University of California, San Diego found that around one third of a million more people showed up at the ballot box in the U.S. in 2010 because of the Facebook message on Election Day. Over 5.4 million people indicated on Facebook that they voted on Election Day 2008 and more than 12 million people clicked the button during the 2010 midterm election.

“Voter turnout is incredibly important to the democratic process. Without voters, there’s no democracy,” lead author James Fowler, UC San Diego professor of political science in the Division of Social Sciences and of medical genetics in the School of Medicine, said in a statement regarding the study.

“Our study suggests that social influence may be the best way to increase voter turnout. Just as importantly, we show that what happens online matters a lot for the ‘real world.’”

The lesson: sometimes peer pressure is a good thing!