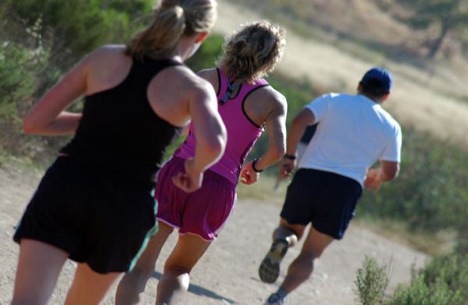 In sports, there's nothing more fundamental than staying the course and getting stronger at the same time.

Seems like that's the case with Netpulse, which got its start in 2002, essentially restarted the company in 2009 with a different model and product, and announced Monday that it's raised $15.6 million in funding, led by August Capital, Javelin Ventures Partners, DFJ Frontier, and Parkview Ventuers.

San Francisco-based Netpulse basically sells software to fitness equipment makers - it has secured six out of the top eight, including Life Fitness, Technogym, and Matrix Fitness Worldwide - that is embedded into the equipment to enable consumers to have an interactive and personalized experience at the gym while working out on a, say, a treadmill or elliptical.

OK. So many of you workout junkies are probably saying, "I just turn on the TV and watch basketball or the home cooking channel and zone out.. What do you mean interact?" For one, Netpulse has a feature that lets you choose different places to run, like the Grand Canyon or Paris. It also knows the topography of the run, so it will raise the treadmill if you're at the climb. That's good for all you lazy Joes who like to keep everything on level two.

Indeed, there's no interaction if there's no value, admits Bryan Arp, Netpulse co-founder and CEO, in an interview. "What we do is create value, like we allow people to bookmark [favorite TV] channels; my workout history is there; my music video playlist and locations of where I want to work out is there."

Additionally, an user can create a music video playlist.  Another upshot of this product is that it's free and consumers can log into any fitness equipment with Netpulse embedded and access their information.

In the future, the company plans to add in gamification elements, such as competing with friends.

For now, logging into any gym around the world and expecting a Netpulse presence and competing with friends are far off. At the moment, there's only 10,000 installed around the world, though the equipment is used multiple times in a day, Arp said.

In addition, the relatively low penetration is only because equipment makers are just rolling out their new equipment this fall, said Arp, explaining that replacing fitness equipment is a long sales cycle. The good news it that Netpulse has a big chunk of the market through its partners.

The partners pay a licensing fee, said Arp, adding that the company expects to generate several million dollars this year. But the big growth area will be advertising and sponsorships, said Arp.

The demographic is also quite attractive with average income at $95,000, said Arp. And, the audience is captive with the average time watching a screen is 22 minutes.

So what kind of advertising opportunities are there for Netpulse? The company plans to create their own media, like the service that lets people run in different locations. For this content, Netpulse landed Gatorade as a sponsor. Of the members, north of 35% chose to interact with the running service. Another campaign showcased couposn. "We did north of 8%of people clicking coupons for EAF (sports drink), owned by Abbott Labs," said Arp.

Netpulse, which raised $3.1 million in October 2009 from Javelin and DFJ Frontier, and another $2 million in August 2010 from both investors, is a great story of perseverance. "Previous iterations were ahead of its time," said Arp, explaining that the act of touching screens wasn't really mainstream a decade ago. Additionally, the types of personalized features that can be added today weren't really possible then.

We connect, engage and entertain the active lifestyle community.