News aggregators have been popular sites to access information. Reddit, Techmeme, Fark (for humor) and once Digg, were the go-to places to find must-read stories that people were surfacing. People stil consume news this way, but now that Pinterest has redesigned the visual face of aggregation, and Facebook has altered who we receive information from, news and information aggregation sites are also changing.

They're increasingly visual and social.

Snip.it, a place to collect stories and showcase them in an aesthetically pleasing manner, unveiled Wednesday a site redesign and a mobile version. Snip.it lets anyone collect articles and oragnize them into topics. "Pinterest lets people collect non-fleeting images and put in collections that others can see," said Ramy Adeeb, CEO and founder of Snip.it. "What Snip.it wants to do is to do the same thing for brain candy."

With the redesign, some new features include being able to customize the color of your collection as well as intelligent recommendations. For instance, if someone is interested in entrepreneurship, Snip.it will suggest other collections a person might find of interest. Snip.it also adopted HTML5 technology so the site responds faster.

And, Snip.it introduced a dashboard that shows traffic stats of your collection. This way you can see how your snips are being shared across social sites, like Twitter and Facebook and see where you're getting traffic from.

Interestingly enough, you can also check out other collectors' stat pages to see which of their snips are popular. 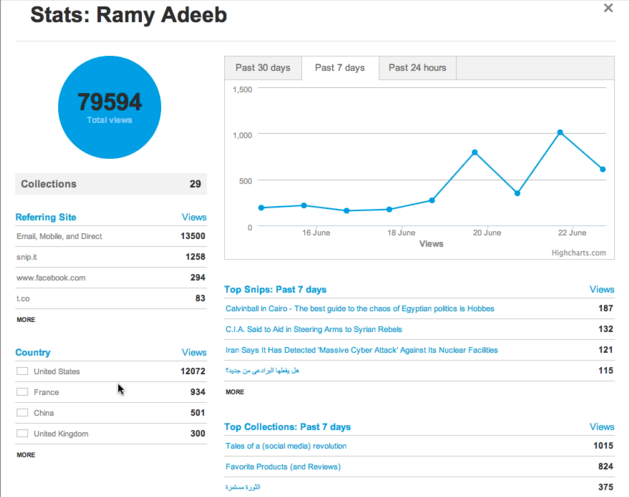 So how did Snip.it come to be?

The idea came to Adeeb when he realized that his posts about the Arab Spring weren't exactly a hit with all of his Facebook friends and Twitter followers. Surprise, surprise. Sure he and his friends and consumers in general were increasingly getting their news from friends or networks sharing them on Facebook and Twitter. But while stories shared on social media sites are socially relevant - meaning stories shared are relevant to me because they're shared by someone I know - "social graphs are not always a good proxy for our interests," he explained.

To this end, he decided that the best way to find interesting news was to follow "topics." 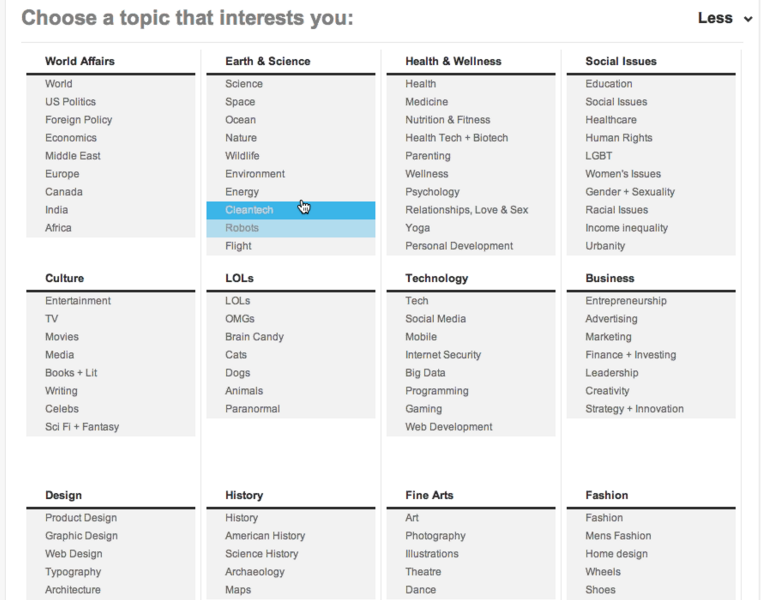 Anyone can create a collection. Snip.it has uber categories, like Typography or Music, that anyone can contribute to. But there are sub-categories created under that main topic that can also be made so readers can get more granular and specific about their interests.

So why would people spend time collecting articles rather than "liking" them randomly? Adeeb believes people want to showcase their smarts or showcase their interests. Indeed, many people already do so by blogging or Tweeting or liking. About 70% of Facebook users share links, said Adeeb. But only 1% to 2% of those online blog. Collecting is "a little more effort than liking something. But a lot less effort than blogging," said Adeeb. "Most of our users don't have a blog. But they're excited about maintaining a presence and brand aroud matters of interest."

Over the past two months, Snip.it has grown its user base to 13,000 people who've created collections. The number of people viewing the content is much higher however.

As for the economics of the service, Snip.it is considering promoted "snips" or ads that go into collections.

Ramy Adeeb is the Founder and CEO of Snip.it, a startup which lets you collect your favorite articles, images, and videos and easily share it with the world.