Start-up raises $2M in seed round of funding from founders

Trying to find the most comprehensive and up-to-date company profile is like trying to find the Holy Grail. It's an elusive quest because they just don't seem to exist. But InfoArmy hopes to come closest to the most info-infused profile. And, it's creating an army to create them.

InfoArmy, founded by Jim Fowler, who founded Jigsaw and sold it to Salesforce.com for $175 million in cash in May 2010, launches Tuesday morning. In addition, the company announced its $2 million in seed funding, which came from Fowler as well as John Peterson, his stepfather.

InfoArmy is essentially an iPad tool for anyone seeking to find information about companies. The information ranges from - competitors, products/services, customers, financials, press reports, links, and social media stats (e.g. how many Twitter followers a company has). The profiles are created by so-called researchers who get paid 50% for every company profile sold. At the moment, the profiles (there are 200 private company profiles) sell for $99 apiece. "The basic idea is we're recruiting an army of researchers and creating intelligence reports for companies," said Fowler, in an interview with me.

The profiles are pretty sweet, despite being version 1.0. Firstly, they're accessible on the iPad, so they're designed to be looked at quickly with a swipe of the page. The layout is such that the information is organized in bite-sized chunks and graphics to allow for easy absorption. 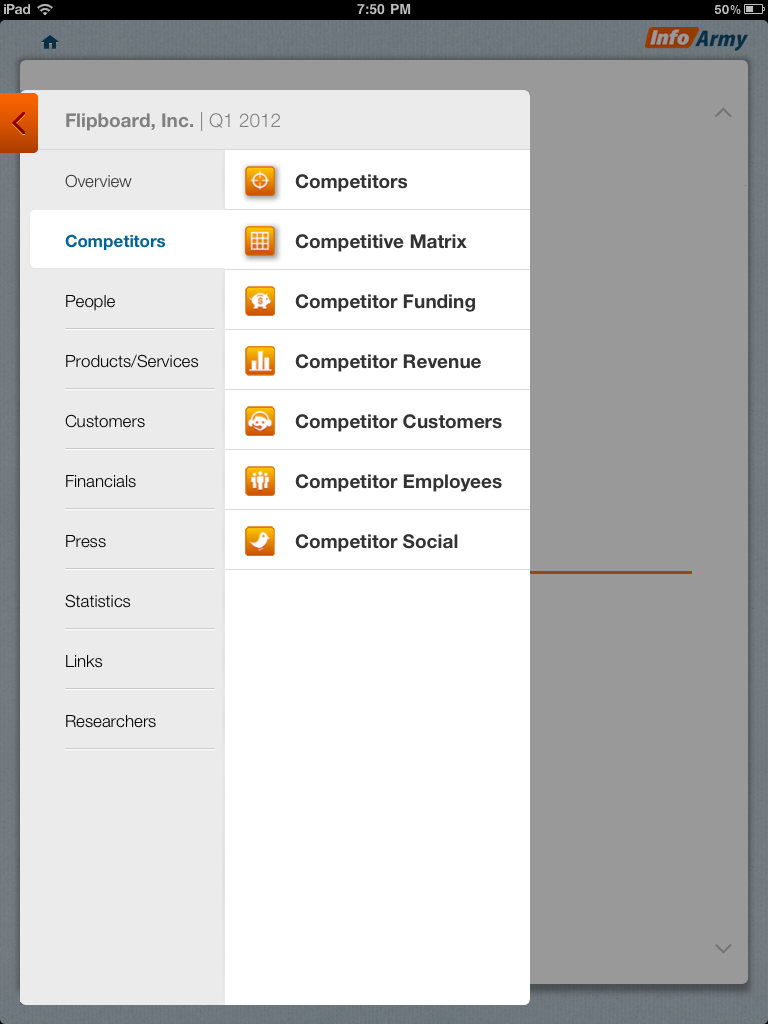 Probably the most useful (if only because it's hard to find) is the competitor information. InfoArmy compares companies to their competitors across funding raised, revenue generated, employees, etc. 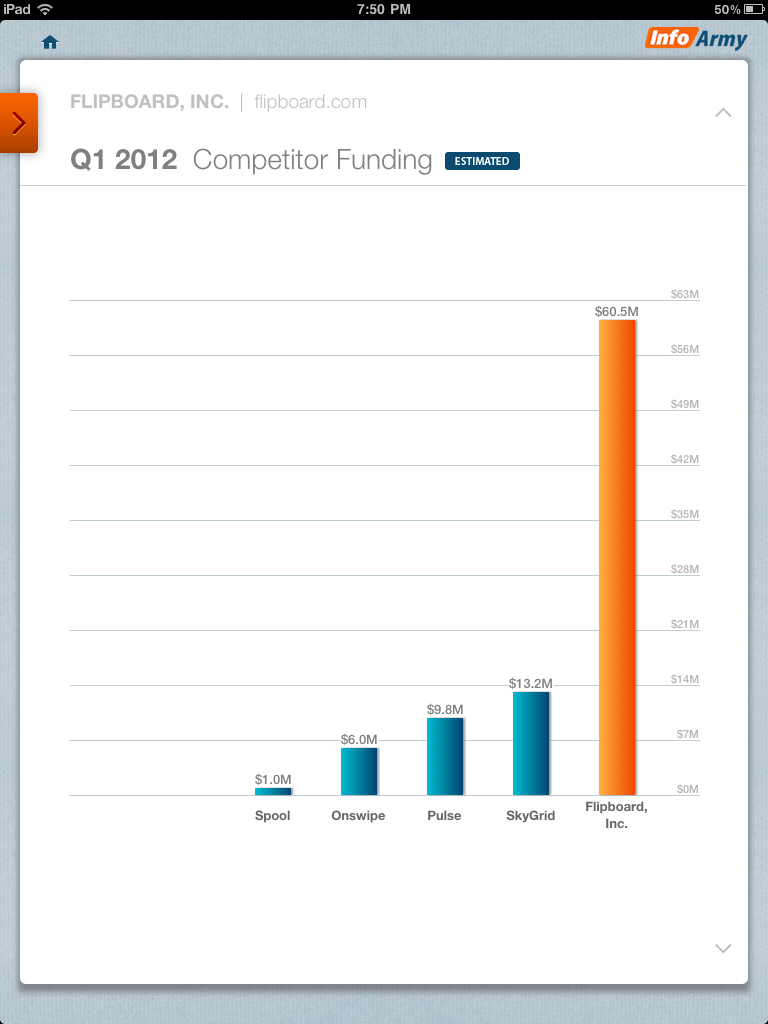 How the crowdsourcing works

Fowler is not a stranger to getting users to input data. He figured out how to do this at Jigsaw. Now he seems to be taking this expertise one step further.

At the moment, there are 100 researchers from around the world, who have been recruited from research organizations filled with people doing research for a living. InfoArmy looked at LinkedIn to find these groups and reached out with incentives to create the profiles. The researchers go through a multiple-step process to put the profiles together.

It typically takes about four hours to put together a report, said Fowler.

"You can't give a partial report," said Fowler.

All the information is gathered from publicly-available information, with the exception of revenue figures. Those numbers are typically estimated. Researchers are taught how to generate revenue estimates for companies after gleaning information across the Web from press articles to press releases. For instance, a revenue number given by a CEO in an article is discounted because he/she is likely overestimating, said Fowler.

The researchers are not only incentivized by the money ($50 per report, or 50% of the price tag), they can also climb the army ranks. The most senior position is the Senior Researcher, who gets 10% of price tag, and the primary researcher gets 40%. In addition, researchers earn stripes for every report they produce. Those stripes are equivalent to credits, which can be used to buy reports. There's more than 10 rank types, including lieutenant to judges. A certain number of reports qualifies a person to move up to another rank. For instance, to be a second lieutenant, one has to have published four reports. To be a judge (a person who resolves uncertainties about a profile), a person must move up 13 ranks.

There is only one primary researcher per company. And, he/she is relied upon to update the profile every quarter. But if that person decides to quit before updating a profile he/she started, it's likely there will be another researcher right there as a replacement, alleviating any concern that a report won't be updated. The $99 per report is a year-long subscription to an updated company profile, thereby requiring InfoArmy to make sure a profile is always updated.

At the moment, most of the reports will likely be bought on an a la carte basis, said Fowler. The $99 figure is similar to what Hoover's sells its reports for. But Hoover's reports seem hardly as interactive. Other reports that compete with InfoArmy include Crunchbase, which has fairly good funding data, though often inaccurate. There's also reports from Dun & Bradstreet, Thomson Reuters, Reed Eslivier and info Group.

Fowler believes there about five million company profiles he can populate in the private sector. He's focusing on private companies only because there's already ample information for public companies. The market for such profiles is pretty significant, he said, referring to Dun & Bradstreet, which generates $1.7 billion in revenue a year, of which 40% goes toward sales and marketing. That revenue line consists of company profile data sold, said Fowler.

Fowler expects professionals in the financial sector, such as investment bankers, will be likely buyers of such research. Eventually, he believes marketing executives will also find the information useful for sales pitches and competitive analysis.

In the long run, Fowler anticipates the big money in the data collected will not be in selling the company profiles, but selling the collective intelligence of the data. For instance, when Fowler ran jigsaw, which also used user-generated content to create a contact database, the changes to the data and the dead contact data was as important as the new information.

"The way that this business becomes a business is not selling reports," he said. "It’s data as a service."

Fowler plans on raising a Series A round of financing this fall.

InfoArmy is recruiting an army of global researchers to create Competitive Intelligence Reports on companies and their competitive eco-systems.

Competitive Intelligence Reports were designed from the ground up for the iPad.