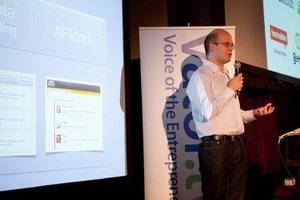 Alexander Osterwalder and I spent last week in Salt Lake City, Utah as judges at the 2nd Annual
International Business Model Competition, hosted by Professor Nathan Furr and his team at the BYU Center for Entrepreneurship.

The idea of a Business Model competition first emerged when I realized that Business Plan writing ought to be taught in English Departments – as they’re the best example of creative writing entrepreneurs will ever do.

The business plan  - a roadmap for execution

When venture capital teamed up with technology entrepreneurs in the 1960’s they brought with them the canonical MBA planning tool – the business plan.

The problem is that once a plan is written it’s static and assumes minimal new learning. This makes sense in a company where your customers, channel and competition are known. And your revenue plan is something more than a hallucination.  But for startups, business plans fail to match the chaotic reality they encounter in the real world. Yet year after year, decade after decade, VC’s would watch as no startup business plan survived first contact with customers. So what did the venture industry do? They kept insisting startups write business plans as the price of entry to venture funding.

The reality is that startups needed a new class of management tools. Tools to help them manage the search for a repeatable and scalable business model. Startups needed tools to help them organize their hypotheses, and then needed a process to rapidly test those hypotheses. And they needed tools that recognized that most startups go from failure to failure as they searched for, and discovered, product/market fit. And that instead of firing executives to match a plan, it was the plan itself that needed to rapidly iterate.

The term business model first appeared ~50 years ago, but the concept didn’t catch onuntil the 1990’s. It wasn’t until 2010 when Alexander Osterwalder published his book Business Model Generation that it became clear that this was the tool to organize startup hypotheses.

It wasn’t long before Alexander and I realized that organizing hypotheses with his canvas was just the first step in building a business. The next step was getting out of the building and testing the business model in a formal process – and that process is Customer Development.

Three years ago, after watching my nth business plan competition I realized this was simply wrong.  Rather than having students invest months writing a 100-page tome and polishing slides that taught them almost nothing about what it was really like to build a company, I thought there had to be a better way.

I suggested that we hold competitions that actually emulated the real world (rather than what’s easy to grade) and hold competitions that emulate what entrepreneurs actually encounter – chaos, uncertainty and unknowns. A business model competition would emulate the “out of the building” experience of real entrepreneurs executing the customer development / business model / agile development stack.

You can write a business plan slide deck in your dorm or library.  But you can’t fake a business model/customer development presentation. It takes a ton of face-face customer interactions.

From the seed of this initial idea Professor Nathan Furr at BYU did the hard work and created a global business model competition, this year receiving over 100 submissions. The finals were held in the packed 1,000 seat BYU auditorium with lines of students outside unable to get in.

(I love walking around the BYU campus. It feels like being at a giant Eagle Scout convention.)

Each team used the business model canvas and customer development stack to go from initial hypotheses, getting outside the building to validate their ideas with customers, and going through multiple pivots to find a validated business model.

All of the Business Model finalists were pretty amazing.   Each one of these presentations moved the teams closer to building a real company.

This years winner were:

The XoomPark team spoke to over 300 people (customers and channel partners,) ended up with 2 partners, 30 parking lot customers, a working website and a validated revenue model.
If you can’t see the slide deck above, click here.
.
2. Excelegrade, Harvard

The Excelegrade team was relentless in hypothesis testing.

FlexLeg got to experience first-hand the complexity of a multi-sided market – something the Business Model Canvas illustrates with startling clarity.