Why TV is still a better advertising medium than online

The TV business keeps getting stronger, boding well for Netflix and Hulu 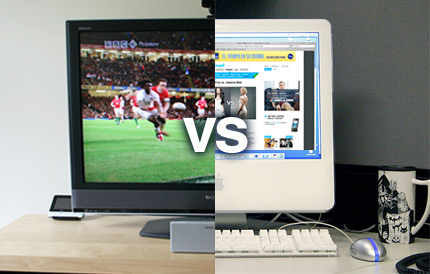 Back in my Broadcast.com, days we had a saying that “bits are bits."  That once content becomes digital, it is naturally going to become available on any and all digital devices. Based on this, we always made the point to be platform and device agnostic. We didn’t care where or how people saw our content, as long as they saw it and we had the chance to monetize it.

We also knew that our core value proposition to consumers was that on broadcast.com they were able to get content that they couldn’t get on TV. We had Yoga channels, we had cricket live and on demand, we had sports , music, movies, tv, comedy and anything else you could think of available. We had a policy that we never tried to create hits. That we were always going to go wide and create a reason for people to start watching video online. Now, 17 years later. Yep, its been 17 years since we started Broadcast.com (as audionet.com first), Youtube and others are still doing the exact same thing.

Good for them, except they are making one huge fundamental mistake, they are trying to create hits. They don’t like the idea that beyond a steady stream of one-hit wonders they haven’t been able to create a sustainable roadmap to content success. In other words, they have no idea how to drive an audience to specific content. Their hits come out of nowhere. (Im excluding music since that has become the domain of VEVO).

TV doesn’t have that problem. TV has a fundamentally different problem. But before we go there, lets talk about the big lie that the internet video folks like to tell in order to pump their products.

The Big Lie = Online video views is the same as number of TV viewers.

One million views of an online video is not ths same as one million viewers of a TV show. Nope. Not true. First, we all know that an online view is not a unique viewer. But lets get beyond that. When you look at USA Today and see number of viewers of a TV show, that is the AVERAGE NUMBER OF VIEWERS that watch the show. So when it says that SharkTank on ABC had four million viewers for a showing on Friday night, that means on average four million people were watching. If you were to look at the total number of households for that showing, it would probably be eight million or more. In addition, we all know that by definition a household has a minimum of one viewer, but it can be higher, so if you want to compare apples to apples with an online video, the starting point has to be Households that watched multiplied by the average number of viewers per household.

But wait, there is more ! The views of a video on Youtube includes all the showings over an extended period of time. The ratings for SharkTank or any TV show all happened during the one hour the show was on the air. Which is exactly why TV is still a much more valuable advertising medium. Would you rather have your ad seen by the audience all within one hour, or over some unknown extended period? Who knows how long it will take for your online video to reach 8mm unique viewers ? It will certainly be more than one hour. That is an advantage that TV has and will not lose for the forseeable future. No matter what happens with wired TVs or mobile devices TV gives you an audience right now. (And yes we could take this further by including DVR usage as well)

So lets get back to traditional  TV. Big media is not as stupid as they used to be. Nor are they as stupid as the internet video proponents want them to be. At CES this past week it was popular to hear about the explosion of online content and how people were going to be watching it on TV now that the new TVs have internet connectivity to all the great providers from Boxee, Netflix, Amazon , etc. These  content distribution companies are not competitors to TV as a lot of folks would like you to believe, they are CUSTOMERS of TV show producers.  They don’t hurt the TV business, they have made the TV business far, far more profitable.  In fact, the competition between all the companies that want to provide content over the internet to your wired tv is driving up the price for content produced for TV.

The Challenge that TV has is not in driving an audience that is bigger than an internet source. That is easy. The challenge is in creating hits that are big enough to maximize revenue and return for that show and to create a promotional platform for other shows.

Now some internet video proponents like to tell you that the audience for broadcast tv is declining significantly with the exception of sports and special live programming, in particular the NFL. They are right. Numbers are down. But what they don’t also tell you is that the financial model has changed. All broadcast networks are owned by  big conglomerates, or have same ownership as a big conglomerate. Because of this, single shows are no longer make or break. Shows are geared towards specific outlets. So you will see shows on USA Network that in the past might have been on NBC. The result is that viewing for cable networks has skyrocketed and the amount of traditional tv watched has continued to increase.

In addition those over the air broadcast networks are now also getting retransmission fees. That second source of revenue will change how they make programming decisions.

But wait there is more ! It used to be that only movie companies got output deals. An output deal is when a TV network pays a percentage of theatrical revenue for the license to show a movie. Today, TV shows are getting output deals and generating lots of revenue across all the different platforms that show TV shows. Its not just syndication,but those online distributors want to make sure they get the best shows and they are committing up front to buy those shows. An output deal. Found money.

The TV business isn’t dead. It really isn’t even morphing. Sure people will watch video online. They will watch it on phones. They will download it. But the videos that online distributors pay the most for will be those that have done the best on traditional TV. Which in turn means more money for the production of shows.

Think of it like an SAT question. Online video is to TV today like DVDs were to Movies in the past. A great revenue source that correlated to the movie’s boxoffice.

Bottom line is that the better the TV business does, the better Hulu and Netflix will do because their primary content will be in greater demand

That’s not to say the TV business is not going to have challenges. It will. It will become addicted to the money it gets from online sources and when some of these sources and the competition between them dry up, they will be caught not being able to reduce their costs. Expect it.

But the online TV content providers have it worse. Yes, there is a business in delivering content via TVs. It will seem very cool that when you hit a button on your remote a list of distributors like Amazon, Hulu , Netflix and others will pop up for you to watch. Some folks will make good money with it. But it still won’t be the competitor to TV that everyone predicts. Why ? Because just like no one took the time to change the blinking 12:00 on their VCRs back in the day, having to hit the internet button on the remote, or even worse, the input  button on the remote will not be the path of least resistance for watching tv. Believe it or not, it will be far too much hassle for most people when compared to just turning on and watching  TV the old fashioned way. And on top of that, distributors like Dish, Directv, Charter, Comcast, etc are working hard to improve their guide experiences which will be faster and easier than their online counterparts.

And last but not least, MOCA, DLNA and good old fashioned wi fi is always going to be a hassle. No one has perfect wi fi at their apartment or house. It always screws up. That may be acceptable to a price sensitive market. But when people want to see Tebow Tebow, buffering just wont cut it.

And let me be the first to describe how Twitter will negatively impact online delivered live TV . Compare the latency of twitter to your phone or Ipad or even TV to the latency of online video over the net to your house, through your house and to your TV. The latency of the video because of all the buffering that is done to reduce interruption of the video will mean that your video feed is behind what you are getting on twitter. Not a problem for ondemand,but not good for communal experiences. So if you all want to watch SharkTank and tweet and FB about it with your friends, its only going to work when you watch on a regular tv feed.

Thats the way I see. Let me know what you think.