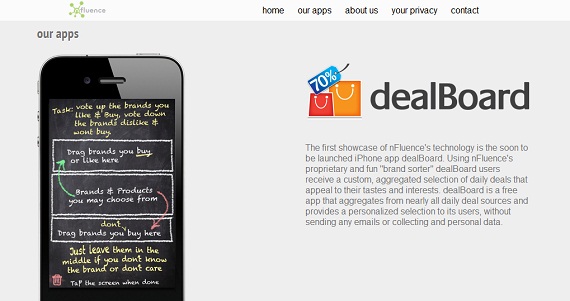 Technology startup nFluence Media announced a $3 million series A funding round, with the investment led by Voyager Capital with contributions from the Alliance of Angels. After working stealth mode for two years, he tech media company will build applications that use anonymous profiles, operating on the idea of "consumers retaking control of the digital presence."

Imagine that, a company that doesn't want your personal information!

“As the four tech giants, Google, Apple, Facebook and Amazon fight over who owns the customer, nFluence is built around a simple idea — the customer owns the customer!” says Brian Roundtree, CTO and founder of nFluence, via the company's release.

NFluence indicated in its release that its first mobile first app, dealBoard, will launch in the Apple App Store later this month. This app will function in the daily deal space, but will collect users' information anonymously, without names, emails, zip codes, birthdays, or any kind of personal information.

Users' data will be collected on dealBoard by way of nFluence's proprietary "brand sorter," which gamifies the data collection process, as concerning shopping preferences and interests, and matches the user with a brand preference profile. DealBoard will be a free app that aggregates from nearly all daily deal sources to give users a personalized array of deal choices, without sending any emails or collecting any personal data.

For dealBoard, nFluence has built a unique database of over 35,000 offers drawn from restaurants, travel companies, brands, retailers and other services, which are then filtered through a user's preferences, as determined by their "brand sorting."

Concurrent with Tuesday's announcement was the news that Tom Huseby will become the company's chairman of the board, while nFluence cofounders Henry Lawson and Brian Roundtree will serve as CEO and CTO, respectively.

“People don’t like most email and mobile marketing and rightfully so, they are inundated with unwanted, mistargeted or stalker-like ads, offers and messages,” said Lawson, in the company's release. “With our technology, we’re able to return control of a consumer’s profile to the person it belongs to, the consumer, not some technology black box... The idea that digital marketing requires data exhaust sniffing is wrong. Consumers want control.”

We find nFluence's operating philosophy concerning user data to be extremely refreshing, and we hope their ideas catch on in the larger tech world.