How do you replicate Silicon Valley entrepreneurship? 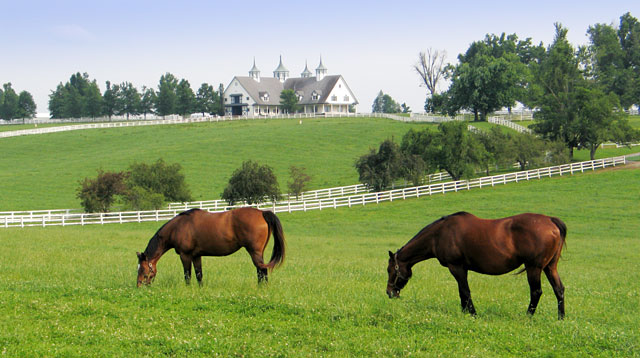 "This country can't be knocked out with one punch," said Clint Eastwood, during the Super Bowl halftime, in an ad for Chrysler. "We get right back up again, and when we do the world is going to hear the roar of our engines. Ya, it's halftime in America, and our second half is about to begin."

I do think there is a second half to America's future that's underway. And, it's not coming from government bailouts but entrepreneurship and innovation.

Bambi and I were recently in Lexington Kentucky which, because of our long friendship with Drew and Heather Curtis of Fark.com, has become a bit of an adopted hometown.  If you’re not really, really, really into horses you’ve probably never been to Lexington, but it’s a beautiful area.  It feels like the English countryside with miles on miles of immaculately groomed horse farms edged with stone walls or white picket fences.

Kentucky is known for horses, bourbon and basketball.

But they’re looking to spark innovation and entrepreneurship in other sectors and Lexington in particular is thinking about how to capture some of the Austin, Boulder magic.

Bambi, Drew and I were asked to serve on the board of the iNET initiative at the University of Kentucky.  An effort to spark entrepreneurship being lead by Dean Dan O’Hare of the College of Communication and Information.  Dean O’Hare has assembled an impressive team of cross disciplinary academics (it appeared most of the other deans from the University of Kentucky were in the meeting!), entrepreneurs, politicians, and other local thought leaders.

It’s really interesting to think about building the environment for entrepreneurship in new regions.  I hear that Brad Feld is working on a book on exactly this topic and I’m sure before it’s even written it’s already a must-read for anyone thinking about these matters.  What Boulder and Brad have done over the last several years to create a vibrant entrepreneurial ecosystem is truly remarkable.  It's being talked about at dinners in places as far flung as, well, Lexington Kentucky!

Over a terrific dinner at Le Deauville with Jim Gray, Mayor of Lexington, Drew, Heather, Bambi and I shared our thoughts on the key elements for an entrepreneurial ecosystem.  Mayor Gray was refreshingly engaged and open to ideas, it was pretty exciting to think about what was possible and how best to leverage Lexington’s many assets.

There's a growing body of thought on this topic.

William F Miller of Stanford University wrote a terrific paper in July 2000 The “Habitat” for Entrepreneurship.  It outlines the ten key factors for building this kind of ecosystem.  This paper has subsequently been refined and turned into a book, you can see a summary here.

Paul Graham wrote a fabulous piece, which I quoted heavily in our chat with the Mayor called How to be Silicon Valley.  My favorite quote from this piece was: “Most nerds like quieter pleasures. They like cafes instead of clubs; used bookshops instead of fashionable clothing shops; hiking instead of dancing; sunlight instead of tall buildings. A nerd's idea of paradise is Berkeley or Boulder.”

Following our dinner I sent Mayor Gray the link to the Paul Graham piece and quick summary of my thoughts on the key points from our conversation – I was thrilled to see he included the email in a talk he gave to entrepreneurs in Lexington – these ideas are spreading and they’re good ideas.

Sequoia Capital’s Mark Kvamme is now the Director of the Ohio Department of Development and is taking up this effort next door in Ohio (for those who don’t know their Ohio/Kentucky geography, the airport for Cincinnati Ohio is actually in Northern Kentucky).

So there’s some interesting things happening across the country.  Brad Feld in Boulder, Mark Kvamme in Ohio and our collective effort in Lexington are, I'm sure, just a tiny list of examples.

This is going to be be good for our country – as Clint Eastwood said during the Super Bowl: “it’s half time America” – maybe all these entrepreneurial seeds are part of the second half.

It’s going to be fun to have an, albeit modest, role in helping Lexington develop its entrepreneurial ecosystem.  I’ll keep you all posted as things progress.

And Brad, hurry up and finish that book, the country is waiting for you to call in the plays!

[picture above is from here]