With Spotify Radio's much bigger library and unlimited skipping, Pandora may go the way of the Dodo 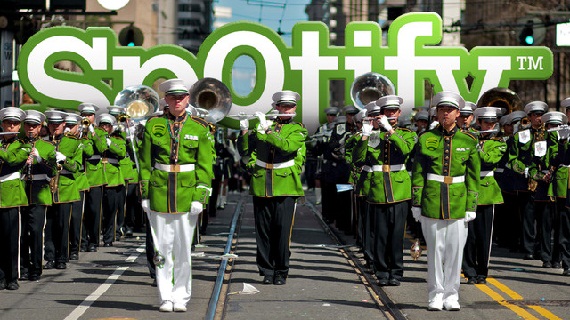 The competition between streaming music sites Spotify and Pandora is about to get even more one-sided, as Spotify announced Friday a newly-refurbished Radio feature in conjunction with its new integration of apps. Spotify Radio will launch in the next few days, but for users who just can't wait til then, the company has provided a handy preview.

The kicker is that the new Spotify Radio beats that other online streaming radio function by Pandora in just about every way possible, which has some analysts of the opinion that Spotify is gunning for Pandora, explicitly.

Adding fuel to these speculations is the fact that when Spotify CEO announced his company's new radio function during an onstage demo at LeWeb 2011, he described it as "kind of like Pandora with unlimited skipping and unlimited stations.”

Yeah, I'd call that a pretty clear cut case of throwing down the "We're better, and we know it" gauntlet. As of the writing of this article, Pandora's stock is down $0.32, or 3.1%.

Unfortunately for Pandora, Ek's description is an accurate assessment. Spotify Radio will allow the user to create an unlimited number of radio stations, as opposed to Pandora's 100 station limit. Also Spotify Radio users will be able to skip through as many songs as they want, while Pandora allows their users only six skips per hour.

Oh yeah, Spotify also has a much bigger library of music than Pandora.

Spotify had already been blowing Pandora out of the water, in terms of what is probably the most often made complaint about the latter, the lack of song choices. Spotify offers 15 million songs, while Pandora only has 900k. Not that 900k wouldn't still dwarf the mp3 library of just about anyone on the planet, but Pandora can't seriously answer Spotify's claim of "any song, any time" with much force.

Pandora's real stronghold in the war for prominence in the online streaming music game had always been the recommendation engine behind its Radio Stations, the ability to create interesting radio stations based on user tastes, recommending similar artists and creating a taste profile based on user responses to song play.

Now that Spotify can offer a better-stocked alternative with relatively fewer interruptions and user options, things don't look good for the little guy.

Spotify has always been a great service, but it has also had indie recording artists complaining about what they feel is a lack of requisite compensation. But I'll admit that this new feature has got me seriously tempted. Resistance to the possibly evil practices of Spotify weakening... New Radio function too cool to resist...