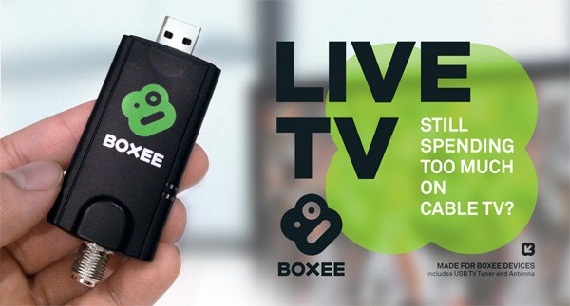 Home theatre application Boxee has announced the launch of a new system called Boxee Live TV. The "Live TV stick" is a USB TV tuner device that essentially digitizes non-cable channels, like NBC, FOX, and ABC. The user plugs the device directly in to the Boxee Box, sets up the antenna, and gets access to broadcast channels.

Boxee's claim to fame is its aggregation of Internet video sites like Hulu, Netflix, and Vimeo for the TV, through it's TV-top hardware called the Boxee Box. The service also offers a built-in Spotify application. Now with Boxee Live TV, users can access broadcast TV, too.

The general appeal of Boxee is that it provides the myriad choice of Internet video platforms with the easy viewing of a cable TV hook-up. "The stuff on Netflix, YouTube, Hulu, Vudu, Vimeo keeps getting better and you can watch it everywhere," said Boxee CEO Avner Ronen via his blog post.

Many people are nixing cable TV plans these days, because most cable content is available in relatively cheap online platforms like Netflix or Hulu, explained Ronen. But the problem is that live broadcast TV events have a lag before they're on the Internet. And as "89 of the top 100 shows are on broadcast" -- Ronen's satistic, mind you -- getting rid of cable can mean putting lots of good TV out of the user's reach.

"Plus for people with families where one person is tech-savvy and the others are not - having everything in one place makes it that much easier for everyone to get along," added the Boxee rep.

News of the live TV USB device was leaked last week, with Boxee confirming the leak Wednesday. The Boxee Live TV device is running for $49 with no monthly fee and will be available in January 2012. A pre-order is available now.

As of yet the Boxee Live TV option is only available in the U.S. and Canada, and is not compatible with PC or Mac applications, for those who use the Boxee platform on their computer. Boxee is working on updated PC and Mac applications, but Live TV won't work on those, either. Also, the Live TV option is not DVR-compatible, which could prove a major drawback for Boxee's 2 million monthly users.

And yet another consideration to take before ordering the Boxee Live TV is that, despite that fact that broadcast channels will be "digital," they will still be subject to network signals. So if a user already has trouble picking up broadcast stations, the new USB plug-in won't change that.