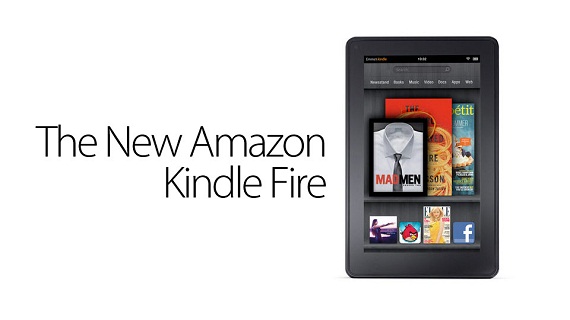 Good news for those of you planning on snapping up the Kindle Fire, upon its November 15 US release date

Amazon announced Wednesday that their new tablet will have access to a whole slew of popular Android apps and games, including Netflix, Rhapsody, Pandora, Twitter, Comics by comiXology, Facebook, The Weather Channel and games from Zynga, EA, Gameloft, PopCap and Rovio.

The Kindle Fire will run on a version of the Google OS Android. Other specs for the Kindle Fire include a 14.6 oz design, a 7'' IPS display, 8GB of storage and 512MB of RAM, and a web browser called Amazon Silk that is customized to enhance Amazon's web capabilities, as well as access to the Amazon App Store.

Those who buy the Kindle Fire will also be treated to a free month of Amazon Prime, with access to their Prime Instant Video catalog, and the new Kindle Owners' Lending Library.

"Kindle Fire offers more than 18 million movies, TV shows, songs, books, magazines, apps and games, as well as free storage in the Amazon Cloud, Whispersync for books and movies," said the company, via a press release.

This newest generation of the Kindle will compete with the new Nook Tablet. So far, the two devices have been found to be similar, with the Kindle Fire having a slight edge on account of its being about $50 cheaper.

The main differences between the Nook Tablet and Kindle Fire are battery life (11.5 hours for Nook vs. 9 hours on the Kindle), and the fact that many of the Kindle Fire features will be stored on the Amazon Cloud, as opposed to the device itself, which has a lower storage capacity than the Nook Tablet. This would mean that during time away from wireless Internet, the Kindle could be missing important features.

Initial bill of materials estimates for the Kindle Fire have been around $190, and with manufacturing costs added, the cost of production for each device rises to around $210. This would indicate a rather low profit margin.

Amazon is expected to make up the difference by heavily promoting the sale of products through Amazon retailers on the Kindle Fire, which would constitute a unique link between digital content and a more conventional retail environment.