Apps to help you survive the zombie apocalypse

Don't be caught unprepared, arm yourself against the oncoming horde of flesh-hungry zombies

It’s never too early to start planning for the zombie apocalypse, and if there’s one thing I’ve learned from watching “The Walking Dead,” it’s that you need a good arsenal of supplies and a Winnebago that doesn’t constantly break down at the most inopportune moments.  The latter will be hard to find, since a faulty Winnebago makes for great dramatic suspense and practically guarantees high ratings.  But the former is a cinch with the right apps at your fingertips, which is why I’ve compiled a list of apps to help you get through the zombie apocalypse.  Download these apps, and you’re on your way to an attractive position as the leader of a ragtag group of survivors.

First and foremost, you need to be prepared, which is why the first app on the list is ZombieBooth.  I know it doesn’t seem utilitarian on the surface, but trust me: it will save you time and energy in the long run. 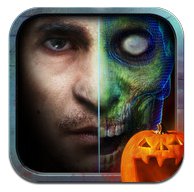 Use it now to find out what your friends and family will look like as zombies so you’ll know who to shoot.  Simply point, click, and see what your wife and kids will look like with necrotized facial tissue and no blood circulation.  In too many zombie movies, a survivor is unable to shoot his zombified best friend, brother, or wife, because he can’t deal with the heaviness of it all.  And what happens?  He’s so frustratingly caught up in his emotions that he doesn’t have time to think and he becomes zombie food.  Save yourself the time and energy and get those emotions out of the way now.

The last thing you want is to end up in the old boarded up recreation center with no food or water, because then someone will go crazy and sabotage the whole outfit.  Zombie survival is all about preparation: use Grocery iQ to stock up on bottled water and canned food, and use the barcode scanner to make a quick and easy list of the items you’ll need, like peanut butter and bread, bottled water, Gatorade (you’ll need your electrolytes when you’re running from zombies), canned tuna, canned vegetables so you don’t get scurvy, and so on.  Also, don’t forget to grab a can-opener.

Okay.  This one is important, because I’ve given a lot of thought to it, and in the event of a zombie apocalypse, survivor groups need people with real, usable skill sets—they need a doctor, a hunter, a 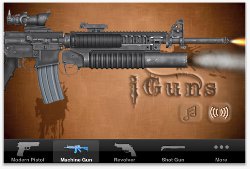 carpenter, and someone who can fix a broken Winnebago.  You know what they don’t need?  They don’t need a nearsighted writer with poor hand-eye coordination and a propensity to laugh loudly and uncontrollably in tense situations (like when you’re hiding in the closet from a zombie that’s broken into your house).  Thus, it is critical that if you are that person (me), you must develop a skill set: shooting.  Use iGuns to practice your aim with another survivor friend.  If nothing else, you can at least prove yourself useful for fighting off oncoming zombies.  Plus, it’s important to note that zombies are lethargic and slow-moving.  Don’t embarrass yourself in front of your survivor friends by shooting at close range and missing.  Then, when the group decides to lighten its load by voting someone out, you can bet you’ll be the first to go.

Another thing I’ve learned from zombie thrillers: it’s never a good idea to pull over on the side of the road to check the map.  You may think it’s safe, but chances are you’ll have your window rolled down (because the window is ALWAYS rolled down), and you won’t hear or see the zombie who calmly staggers up to the car and leans in for a bite.  You need a GPS app that will actually tell you where to go without you having to stop and fiddle with it.  It’s also handy since TomTom stays up-to-date on which roads and routes have been changed, so you won’t waste any of your precious, precious fuel driving around in circles while you’re trying to make your way out of the city toward the nearest zombie-free zone.

At some point, someone in your survivor group will start pilfering food from the group’s food stores—I don’t know why…it just seems to be what happens when the apocalypse hits.  Someone panics and starts hoarding food and stealing other people’s food (likely the same person who will go crazy and sabotage the whole group if you end up in the rec center with no food).  So you’ll need the Motion Detector app so you can hide your iPhone among your food and capture the thief on camera when he/she breaks in to steal your Lunchables. 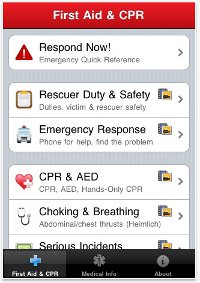 It’s important to note that if someone from your survivor group gets bitten by a zombie, zombie movie consensus dictates that no amount of wound treatment—not even cutting off the infected limb—will prevent that person from becoming one of the undead, so first aid won’t help you there.  But, in the event that someone has a run-of-the-mill accident and needs first aid or CPR—and you STILL haven’t managed to find a doctor to add to your survivor group (there’s usually at least one in every group—why haven’t you found one yet?)—this handy app will guide you through some of the basics, like how to do chest compressions, performing CPR on a child, treating burns, handling seizures, and because you’re likely to have a diabetic in your group (again: zombie movie consensus), the app also shows you how to handle diabetic emergencies.  The app is not a stand-in for a doctor, though, so quit lollygagging and find a survivor with medical training.

This one is for the ladies, and it’s something I always wonder about in zombie apocalypse thrillers.  Chances are you’ll end up sleeping with someone in your survivor group (will it be the quiet mechanic, the strapping carpenter, the handsome but socially awkward doctor, or the emotionally tortured hunter?  …God, I’m so sexist).  The last thing your survivor outfit needs is a crying baby alerting all the zombies in the neighborhood to your location (although an unplanned pregnancy would make for some great dramatic suspense and, ergo, higher ratings).  So if you happened to remember to grab your birth control pills on your way out of the house as you were fleeing zombies—or you were able to break into a pharmacy to steal someone else’s birth control pills—don’t forget to take them!  Use this app to get a daily reminder on your phone.  Conversely, if you did not remember to pack your pills along with bottled water and canned food, you can also try the Ovulation Calendar app to track your cycle using the Fertility Awareness Method (not as fool-proof, but better than nothing).

The six apps listed above are not all inclusive, since your biggest problem will be detecting whether someone in your group has been infected with the zombie virus, which usually requires a blood or saliva test.  At present, there is no app for that.  But by downloading these apps, you’ll be prepared for the coming zombie apocalypse—and then you’ll have the last laugh when you’re shooting the zombie friends who made fun of you for practicing your shooting skills with iGuns instead of going out on Friday nights.