Stock market and the gaming industry at odds

The Association of Gaming Equipment Manufacturers  (AGEM) believes the gaming industry is being evaluated unfairly by the stock market.  The Nevada-based,  AGEM,who represents gaming suppliers and innovators in the global market, released Monday its monthly 2011 index report and concluded that the market pushed the stocks price down by 7.2%. Closing the month of September at 105.80, declining by 8.18 points, it was the largest one month  fall for the AGEM Index, in 2011.

With innovation in the gaming industry soaring with the adoption of HTML5, and reports from the U.S. Bureau of Labor Statistic, that job creation both in technology and gaming and gambling suppliers remains steady, AGEM believes investors are not evaluating the gaming industry to its true value.  And despite the gaming industry's ongoing growth, and positive impact on the recovery of the economy, AGEM reports that the gaming industry has fallen victim to investors' reactions to the stagnant job growth and Wall Street protests, with declining stock prices.

The AGEM index includes seventeen global gaming suppliers (shown in graph below) but only four companies, three of them located outside the United States, reported positive monthly gains in their stock price this past month.

Intralot  (INLOT), an international player in the lottery sector in more than 53 countries, on all 5 continents, stock price rose 0.03 points to the index sourced to a 8.75% increase.

Decline were seen for Konami (KNM) which reported a decline of 8.99% in its stock price, dropping 2.93 points from the index. 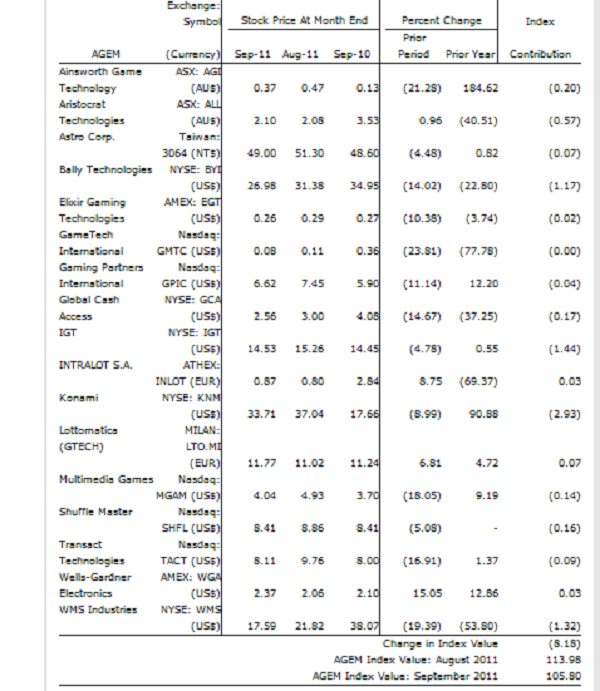 The report also shows growth in the international market, both for, WMS and IGT. AGEM believes overseas markets are going to be a positive as gaming demand throughout Asia and Europe continues to grows. Boosting confidence at the  G2E earlier this October, MGM Chairman and Chief Executive Officer Jim Murren said in a press release that he foresees "two or three" additional gaming markets to open in Asia.

Unfortunately, with the entire global economy experiencing complete disruption in 2008, confidence in the market has yet to return.  And the gaming industry is no exception to that reality.