Steve Jobs was a mentor to young innovators and leaders 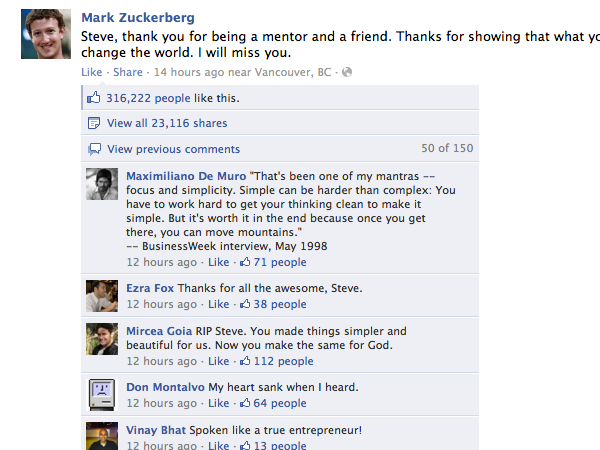 There is a black cloud over Silicon Valley Thursday, with the news of the loss of late Apple founder Steve Jobs to pancreatic cancer. Countless blog posts, tweets, and Facebook updates express the mourning felt by the loss of the visionary.

Mark Zukerburg joined in the online memorials, posting a message to his Facebook page remembering Jobs.

“Steve, thank you for being a mentor and a friend. Thanks for showing that what you build can change the world,” Zuckerburg wrote.  “I will miss you.”

Apple and Facebook have had a rocky relationship, with the latest chattering across the tech industry being the lack of announcement of an official Facebook iPad app at Apple’s iPhone launch event on Oct. 4, after it was heavily rumored this announcement would take place.

Zuckerburg’s post, which has received 304,350 likes and 22,376 shares, highlights the emotion many start-up and tech leaders are likely feeling with the loss of a mentor.

Though there are particular similarities between Jobs and Zuckerberg—both of whom dropped out of college to found their companies in their early twenties— in Silicion Valley, the land of 20-something CEOs, Job’s career path, unique leadership abilities, and vision for what he built inspired generations of start-up leaders.

Only 56 at the time of his death, Jobs had already spent 35 years in the industry since he co-founded Apple with Steve Wozniak in 1976.

But Jobs not only inspired those in the tech industry.

He was admired across industries, the nation, and the world for his passion, drive, and motivation, which brought us the personal computer, iPhone, iPad, to name a few. It was reported that the social networking site Twitter became unavailable after the news of Jobs’ death was announced.

President Obama also issued a statement to the news of Job’s passing.

“Steve was among the greatest of American innovators — brave enough to think differently, bold enough to believe he could change the world and talented enough to do it,” Obama said.

Steve Jobs was one-of-kind. But lets hope his legacy will include generations of leaders who look at his life for inspiration and guidence. 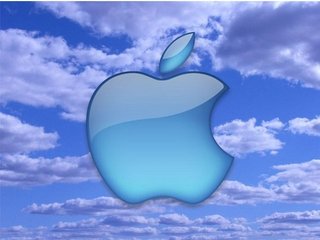