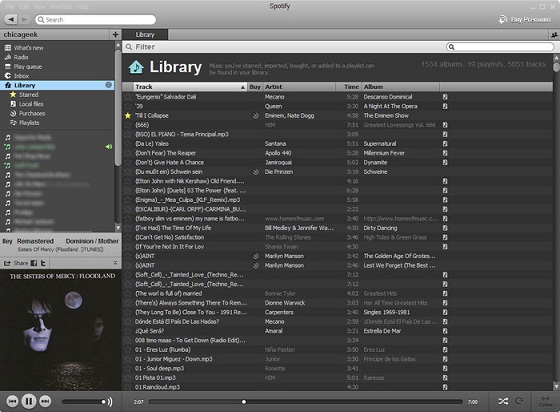 As the new Facebook rolls out, so will their affiliation with several free music services Facebook hopes will make the social networking media experience ever more interactive. At the top of the heap, at least according to Facebook's recent F8 presentation, is Spotify, with MOG, Turntable.fm, and Pandora nipping closely at its heels.

So what's the difference between these so-called free services? It turns out quite a bit.

Spotify features the biggest music library of the group with 15 million songs, with an option to import MP3s from personal players onto the site. It has a good-looking design layout, with a mobile option and unlimited play with their Premium account. New users are allowed six months of unlimited play of their entire library, after which they have a 10-hour-per-month limit, as well as a limit of 5 plays per track.

Spotify's blog also promises a greater presence on Facebook. In a post on Sep. 21, the day of Facebook's F8 convention, a Spotify blog post said, "You’ll now start seeing new music posts and play buttons all over your [Facebook] newsfeeds."

In response to Spotify, MOG also launched its free option earlier this month. They have similar interactivity on Facebook, and like Spotify they have an option to access Facebook friends' "public playlists." However, something MOG has that Spotify doesn't is the option to "earn music" by inviting friends.

Both Spotify and MOG have a two-tiered pay option, a $5 a month and a $10 a month. For both, the major difference between these two plans is that the more expensive option includes the use of the services in mobile devices, with no ads, and with the ability to download songs and play music while offline.

The other two options are different from each other in more obvious ways, though they are similar for being totally free. Turntable.fm is much more of a social networking site, that happens to use music as its medium, while Pandora is more like a personalized radio station with more ads that any of the other services. Both allow users to post their song choices on Facebook and Twitter pages.

Turntable.fm operates by putting users within "rooms," similar to chat rooms. Except here, rather than interacting directly, a "DJ" is assigned on a rolling basis to each room. The DJ gets to choose what songs play, and then other users in the room mark their song choices as either "awesome" or "lame." Then based on these user-determined scores, each DJ either continues choosing songs for this room, or is booted off for the next person in the queue to get their turn.

The Turntable.fm interface is less transparent than the others (and in some ways is downright confusing), yet it also has possibilities for users to truly socialize through music. For example, certain rooms can determine their own rules for how long a given DJ can spin.

Turntable.fm recently secured a $7 million investment, subsequently making the swith from an invite-only beta to being open to the general population.

Pandora operates like a personalized radio station. A user enters in a list of preferred artists and then through the site's Music Genome Program, a station is created playing tunes tailored to the user's given preferences. Every three or four songs, an advertisement plays, which can be jarring, but the listening is otherwise free and unlimited.

Both Spotify and MOG also offer a "radio play," which randomized the user's preferences into a radio-like experience, though with the aforementioned limitations based on plays per month on the free option.

Pandora just recently rolled out their New Pandora initiative, in which a previous 40 hrs per month model was replaced with unlimited listening.