Google may have just reached a settlement with the Department of Justice to the tune of $500 million—one of the largest settlements a single company has ever paid in a dispute with a government agency.  The New York Times reported on this Wednesday morning.

Regulators are expected to announce the settlement Wednesday, which will put to rest charges that Google knowingly accepted ad revenue from illegal online pharmacies that allow people to buy pharmaceuticals without a prescription.

The charges came to light in May, when Google revealed that it was setting aside $500 million—nearly a quarter of its Q1 net income—to resolve the dispute.    While it was a drop in the proverbial bucket, considering the fact that Google took home $29.3 billion in revenue in 2010, it nevertheless represented a serious chunk of Google’s quarterly income, which dropped to $1.8 billion from $2.3 billion.

Of the $29.3 billion that Google made in revenue in 2010, a full $28.2 billion came from ad revenue alone, and the Department of Justice sought to find out just how much Google knew about illegal ads for prescription drugs.

In 2003, Google began banning ads from U.S. pharmacies that offered to sell prescription drugs like Vicodin and Viagra without a prescription, as did Yahoo and Microsoft, after the FDA began cracking down on such ads.  But a year later, Google stoked the fire when it announced that it would continue to serve ads from Canadian pharmacies.  (Thank you, cheap Canadian drugs, for keeping Grandma alive.)  But pressure from the FDA eventually prompted Google to retract its promise and swear to only serve ads from licensed U.S. pharmacies from now on.

The problem, says Google, is that illegal pharmacies are still finding ways to get their ads on Google, despite protections that Google has implemented to weed out such ads.  “Despite our best efforts—from extensive verification procedures, to automated keyword blocking, to changing our ads policies—a small percentage of pharma ads from these rogue companies is still appearing on Google,” wrote Google Litigation Counsel Mike Zwibbelman in a blog post back in September 2010.

In an attempt to curb the number of companies posting illegal pharmaceutical ads, Google filed a civil lawsuit in federal court against advertisers it believed were responsible for such ads.

But apparently, that wasn’t enough to convince the Justice Department that Google was doing its utmost to keep illegal pharma ads from popping up in search results.

While the settlement represents one of the largest penalties ever paid by a tech company to the DOJ, it is not the largest overall.  In 2009, pharmaceutical company Pfizer agreed to pay $2.3 billion to settle an investigation on charges of fraudulent marketing after it rebranded the anti-inflammatory drug Bextra after the FDA declined to approve certain uses of the drug for safety reasons.  The settlement was the largest in U.S. history. 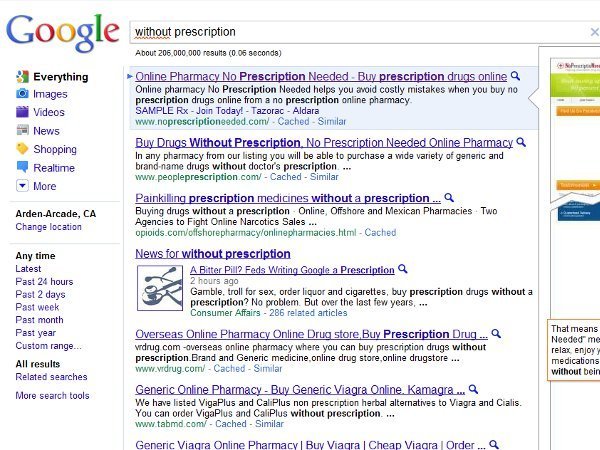 Google to shell out $500M to DOJ over ads