Amazon is proving more and more that it’s a force to be reckoned with in the streaming video rental space.  The e-tail giant announced Thursday that its Instant Video library has grown to more than 100,000 titles available for instant streaming—some five-times the size of Netflix’s Watch Instantly collection.  Netflix’s case isn’t helped by the fact that it just jacked up its DVD + instant streaming plan by 60%.  Tread lightly, Netflix.

Of the 100,000 movies and TV shows Amazon is now offering for instant streaming on its website, 15,000 are available in HD and 9,000 are free for Amazon Prime members—the catch being, of course, that those 9,000 titles are pretty crappy.  But you can’t win ‘em all.

So where does that leave Netflix?  While Amazon boasts 100,000 titles available for instant streaming, Netflix—the online movie rental pioneer—lays claim to only 20,000.  To make matters worse, in July, Netflix announced a new pricing scheme that would raise the price for its DVD + instant streaming plan to $16 a month, while making separate DVD-only and instant streaming-only plans available for $8 a month each.  The problem, of course, is that Netflix’s instant streaming selection, while expanding, still leaves much to be desired.

Netflix is also facing down competition from Walmart, which jumped into the streaming video rental space last month with the launch of its new rental service, powered by Vudu.

If Netflix wants to stay on top of the game, it’s going to have to reprioritize ASAP, since few customers are going to be willing to pay more for subpar service for long. 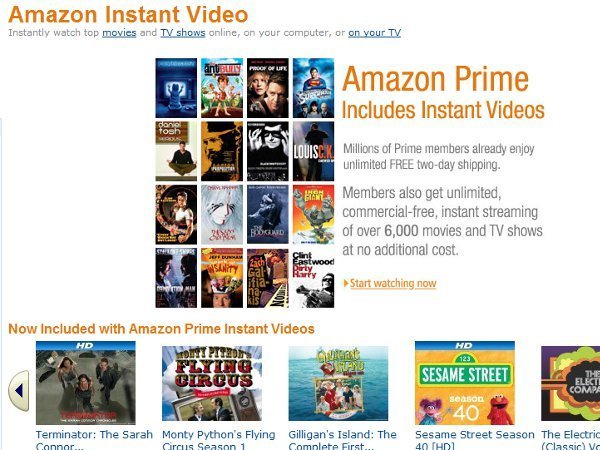