Google+ comes to iPad and iPod Touch, plus tweaks

Choose exactly what streams you want to see, hone in on certain people for your Huddles

Google on Monday announced that its Google+ app is now available on the iPad and iPod Touch, in addition to iPhone and Android.

The iOS app also introduces a few tweaks and new features that bring it up to speed with the Android version.

Central to the new app is the ability to choose stream views, meaning that, with a simple flick to the left or right, you can switch between different streams. The main stream is “Circles” (all the people in your circles), followed by “Incoming” (posts shared with you by people not necessarily in your circles), “Nearby” (posts from Google+ users in your vicinity) and then any circles you may have created.

From the app’s preferences, you can easily enable or disable any of these feeds, or reorder them.

“Just for fun,” says Google+ iPhone tech lead Sharvil Nanavati, “we added a secret way to bring up the stream selection setting menu. So have fun hunting for this little gem, and keep sending us your great feedback.”

As far as I can tell, the secret way to access the menu is by tapping the slim bar that indicates the stream you’re currently viewing.

Huddles has also been upgraded so that you can say specifically who is allowed to start a message chain with you.

Another cool feature (and one that should have been included from day one) is the ability to “plus-mention” (e.g. +Ronny Kerr) somebody in posts. Just type ‘+’ along with some letters, and Google+ will automatically start suggesting names to mention.

Expect to see iPad and iPod Touch users welcoming this app gladly as the first way to use Google+ natively. But it’s also an important app because it introduces some of the most basic, best functionality from the Web experience of Google+. That is, we can now take full advantage of circles. 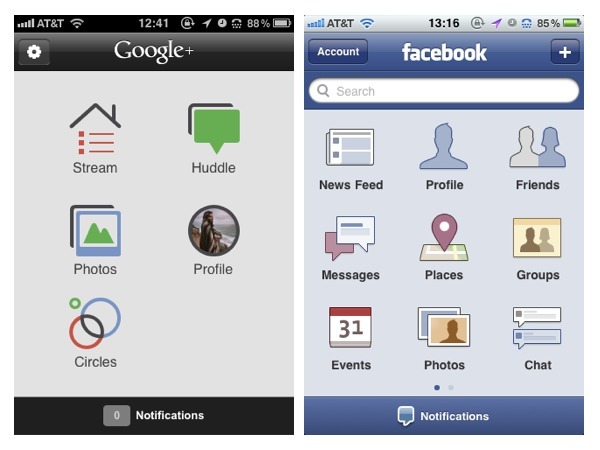