Less than one year after its launch, the .CO registry announced Thursday that it has reached the one millionth .CO domain milestone. Since the company’s launch in July 2010, individuals and organizations from over 200 countries have registered domains at .CO.

The company claims that .CO is the fastest growing global domain name in history, and it expects this rapid growth to continue at the same breakneck pace for the next three to five years, with the key developing areas of Latin America and Asia likely accounting for the bulk of that growth.

“Entrepreneurs and innovative businesses around the globe are adopting .CO web addresses at an unprecedented pace, way beyond my initial expectations," said Juan Diego Calle, CEO of .CO Internet, in a statement. "To hit this milestone in less than a year is a great testament to the hard work and dedication of our team - and especially to the foresight of all of those who believed in .CO from the very beginning.”

The company is celebrating the milestone with a series of short videos titled “Under the Bulb,” which spotlight the people behind the growth of .CO. The “Under the Bulb” series will be showcased at a private event on June 9 for Internet Week in New York City.

In January, the company announced that it would be auctioning off the much-coveted i.CO domain name. It would be the first of several single-letter domain names to be auctioned off. Among .CO’s first customers were major companies scrambling for the prized single-letter domain names, such as Twitter, which snagged t.CO, Overstock, which claimed o.CO (which the company bought for $350,000), and GoDaddy, which took x.CO.

With relaxed registration policies, enhanced security, and advanced rights protections for brand owners, .CO is geared up to become the next great Internet address.  The possibilities are even richer for businesses and entrepreneurs when you consider the fact that “co” can mean “company,” “corporation,” or “commerce.” 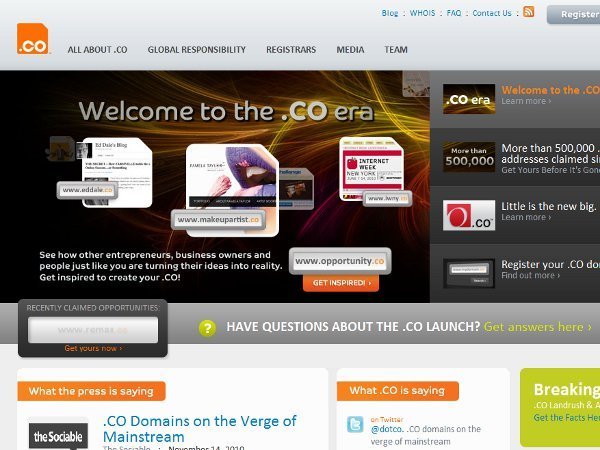