Despite taking a hit in search traffic from Google's Panda, Helium keeps on truckin'

Helium, a self-publishing site that bills itself as a “citizen journalism” hub, has raised $10 million in debt financing according to a recently filed SEC form, bringing the company’s total raised to $27 million. The investors have not been disclosed and Helium was not immediately available for comment.

Founded in 2007, Helium’s user-generated content platform is strangely reminiscent of Demand Media’s platform. Anyone is free to sign up and users get paid for the content they produce. Like Demand, Helium’s articles are designed to be SEO-friendly and catch as many Google hits as possible, so the site has a store of article titles from which writers can choose. Unlike Demand, however, Helium also allows writers to come up with their own titles—granted they must submit the title for approval in advance with keywords and the specific search phrases people would probably enter into Google to find the article.

Also unlike Demand, Helium has a number of different ways writers can earn money. “Marketplace” articles are the most direct route to payment, as those are articles that publishers want someone to write, and to which they’ve already attached a price tag. Those articles can range from $20 to $100, with Helium taking a hefty 20% cut (lame).

Additionally, writers can earn ad revenue for their own articles. The more hits an article gets, the more money the writer can earn (which gives writers an incentive to write SEO-oriented articles).

But like Demand, Helium has been deeply affected by Google’s recently adjusted algorithm, Panda, which was created to weed out low-quality content from Google’s search results. Helium has admitted that its community has been heavily impacted by the change and the site has seen a significant drop in search traffic, though it has not said exactly how much (Demand’s eHow property saw a 20% drop in traffic and a 12% drop in overall page views).

Helium initially fought back by encouraging longer articles (called “deep” content, versus short articles which are called “shallow” content), which appeal to Google’s new algorithm. Additionally, the company increased the length an article had to be before it could be paginated (pagination leads to more ad revenue as readers have to click to open the next part of the article), but that turned out to be ill-advised, so the company has since reverted back to its original pagination settings.

“It is our strong position that most of the content on Helium is of high quality,” wrote Tracy Flynn, VP of architecture and technology, in a company blog post. “We – that is both Helium and our community – have put a lot of energy and effort into making sure that’s true. That position has been confirmed again and again by our customers and other parties, and, yes, by Google itself. Are there bad articles published on Helium? Of course there are – but fewer as time goes by, as our writers produce better content, and as our community members improve the site.”

Helium is still in discussions with Google, who—it claims—has agreed that the site publishes “quality content.” And how can you argue with that with such gripping titles as “How to assess dog poop for health problems” and “How to make a Magic Chef MCD795SW microwave oven stop beeping”?

But whatever Helium's issues are now, someone felt confident enough in the company to funnel $10 million into it. 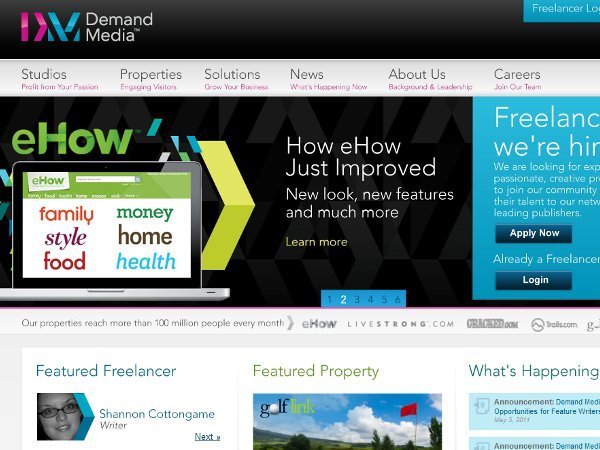