Tiny Speck, developer of a massively multiplayer online game called Glitch, has secured a $10.7 million Series B round of funding from Andreessen Horowitz and Accel Partners, the company's original investors. Last we covered Tiny Speck was almost exactly a year ago, when the company raised a $5 million Series A from Accel and Andreessen. In total, the company has raised $17.2 million since its founding in 2009.

As part of the latest round, Andreesseen Horowitz general partner John O’Farrell will join the Tiny Speck board.

Though Glitch was initially slated for a private alpha release quickly after the Series A closed, with beta testing to start that summer, unexpected delays struck the small gaming company--perhaps something to be expected when you get an eight-person team developing such an ambitious game. I myself didn’t receive my alpha invitation until the fall of 2010, when Tiny Speck had aimed to launch the game in full, and the beta is just finally getting started next week.

“We knew it was going to be a long round of testing (though maybe not this long) and it turned out we were right,” writes Tiny Speck co-founder Stewart Butterfield, in a blog post. Butterfield created the company along with three others from the original Flickr team.

“Hundreds of features have been added —and nearly as many trimmed or re-thought— thousands of pictures drawn and animations made, hundreds of thousands of lines of code written, all of it powered by support, feedback, patience, (and impatience!) from our testing community. Thank you all, so much, for being an integral part of our journey.”

Like any massively multiplayer online game, Glitch is as open an experience as it gets. Your in-game avatar is completely customizable and the gameplay is heavily social, allowing you to interact with whom you please and wander where you will, completing quests along the way.

Headquartered in Vancouver and San Francisco, Tiny Speck will spend at least part of its new funding on finding some new team members. Right now, the company is looking for a Visual/UI Designer, a Game Engineer, and Interaction/User Experience Designer. If you love design and gaming, you know where to apply. 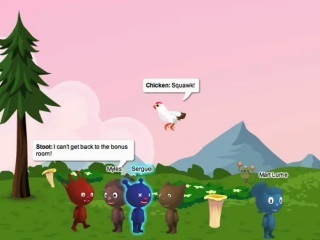